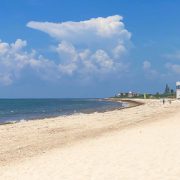 It is natural for seaweed to wash up on the beach from season to season, after storms and in the summer heat. However, this summer larger quantities of two species of seaweed known as Gulfweed or Sargassum (Sargassum natans and Sargassum fluitans) are coming ashore from time to time in the Riviera Maya, Cancun and other parts of the Mexican Caribbean. These landings occur periodically, the amount of seaweed varies and not all beaches are affected.

Similar landings are occurring in the Caribbean islands and along the Gulf coast of the United States.

The word Sargassum comes from the Portuguese word sargaço, which means “little grapes,” a reference to the air-filled bladders that enables it to float on the surface and move with the currents. Unlike other algae that are rooted in the seabed or attached to rocks or corals, pelagic or free floating sargassum grows and reproduces as it drifts through the water.

Pelagic Sargassum is historically associated with the Sargasso Sea in the North Atlantic Ocean where vast beds of it are a habitat for marine life such as microscopic plants, shrimp, crabs, sea horses, baby fish and turtles.

Sometimes ocean currents transport lines or patches of this seaweed to areas beyond the Sargasso Sea. However, biologists believe that the Sargassum affecting the Caribbean islands and the coast of Quintana Roo may have a different source, an area off the coast of northern Brazil, thousands of kilometers away. The causes of the seaweed proliferation or bloom have been attributed to rising sea temperatures due to global warming and excessive nutrients in the water flowing into the sea from the Amazon River and its many tributaries. The appearance of drifting mats of sargassum where they were previously very rare may also be linked to variations in currents and wind patterns.

A statewide campaign is underway to track the movement of patches of drifting sargassum and to collect and dispose of the seaweed when it comes ashore on public beaches in different parts of the Mexican Caribbean. The Mexican government has pledged additional funds for beach cleaning during the summer. Many hotels and resorts have their own cleaning programs and there are volunteer beach cleaning initiatives too.

In Puerto Morelos, the local authorities are now using a boat to collect the seaweed before it reaches the shallows while brigades dispose of patches that have already come ashore.

At Grand Residences, a mechanized beach sweeper operates twice a day. If needed, the resort’s team of gardeners is on call to offer additional support.

Seaweed washes up on the beach naturally and is an important habitat for marine life. The presence of seaweed does not mean that beaches are polluted.

Showering after swimming is recommended and swimsuits should be rinsed out after use. Seaweed will not sting you. However, microscopic creatures or insects may be trapped in the weed and can occasionally irritate the skin, hence the recommendation to rinse off after sea bathing.