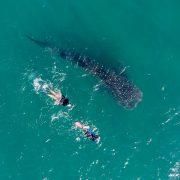 This summer renew your bond with nature with an amazing encounter with some of the Yucatan’s wild creatures, seasonal visitors and year-round residents. Here are two unforgettable experiences to get you started. 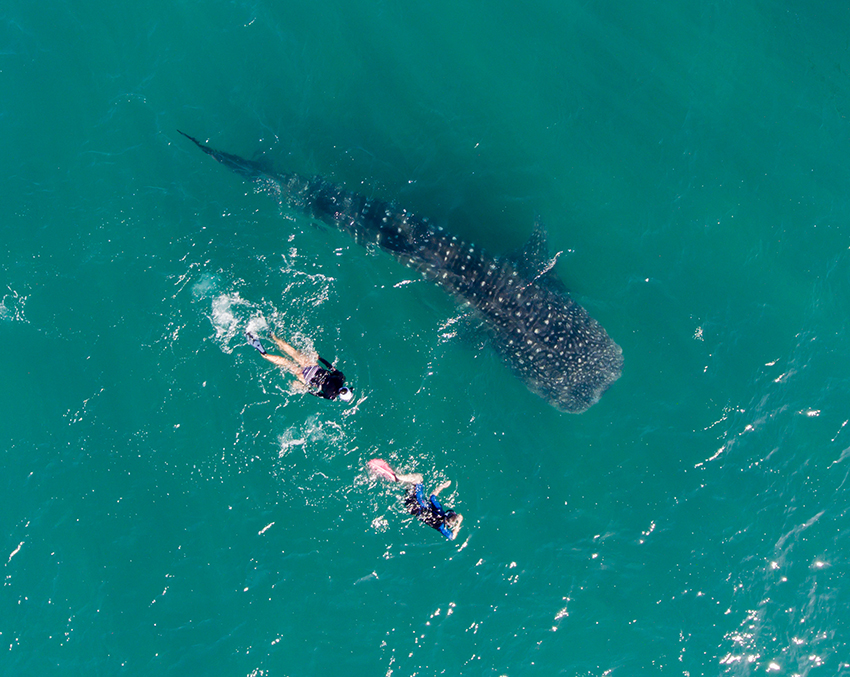 First up, it’s whale shark season and your chance to swim and snorkel side by side with the world’s largest fish. Lone ocean wanderers crossing the tropical seas in search of food, these gentle giants gather in the waters of the Mexican Caribbean from mid-May to mid-September to feast on the plankton that blooms in the summer heat.

Scientists believe that the whale shark feeding grounds off the coast of Holbox and Cabo Catoche and to the east of Contoy and Isla Mujeres attract what is the largest aggregation or gathering of whale sharks in the world. In addition to plankton, they have discovered that the sharks are partial to fish roe. The bonito or little tunny, a member of the tuna family, lays its eggs in area waters in the summer. Similar findings have been made in Belize where the whale sharks gather to eat snapper eggs in the springtime.

Guided eco trips are available to see the whale sharks and the thrill of watching these immense creatures filter feeding on the water surface is indescribable. You may be daunted at first by their immensity but as you swim alongside them with your guide, at a distance of at least five meters, you’ll see how peaceful they are.

More ocean giants, graceful manta rays, also gather to sup on the plankton and you may see them leaping from the water in flight. Dolphins and sea turtles can also be spotted during your boat ride to the whale shark feeding grounds. 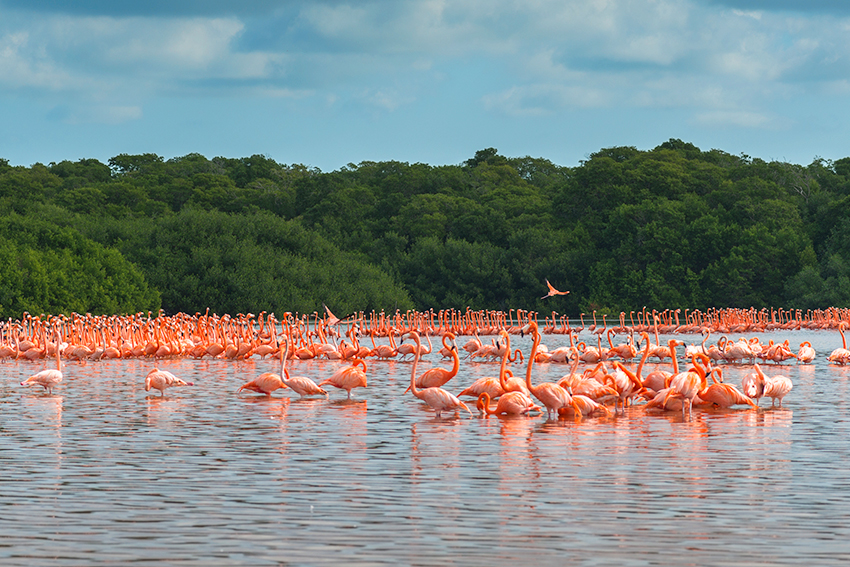 Did you know that the Yucatan is home to the largest breeding colony of wild Caribbean flamingos in the world? More than 37,000 of these birds live in the Ría Lagartos Biosphere Reserve on the Gulf coast. They fan out from the reserve feeding in the wetlands and lagoons along the shoreline, flying as far as Holbox, Cozumel and Sian Ka’an. There are also flamingo colonies in Celestun Biosphere Reserve and Los Petenes Reserve in Campeche.

Boat trips are available from the fishing village of Rio Lagartos. Local fishermen trained as eco guides take you through the mangroves, lagoons and the strange landscape of the salt flats to see the flamingos, and other birds such as herons, egrets, spoonbills, skimmers and pelicans that feed in the shallows. Besides flamingos, the reserve is home to 394 species of birds, in addition to crocodiles, jaguars, deer, peccary and other creatures.

When you see the ribbon of pink on the horizon or a flock of flamingos coming in to land you’ll be struck by the dazzling shade of their salmon plumage, much brighter than their Andean and African cousins. This is due to their diet of minute brine shrimp or artemia found only in the Yucatan wetlands.

If you want to go further afield, plan a trip to Celestun Biosphere Reserve on the west coast of the peninsula. The mangrove forest is even taller and denser here and your boat will take you past flamingos stepping out in single file through the water. Look through the trees and you’ll spot emerald green pygmy kingfishers, secretive tiger herons and hawks.

Biologists working in the Ria Lagartos Reserve announced earlier this year that they had counted a record 21,960 nests. In total, the population of flamingos in the Yucatan Peninsula is estimated at around 90,000 birds.

During the spring and summer, the flamingos are busy feeding their chicks. The best time to see them year-round is at sunrise and sunset.