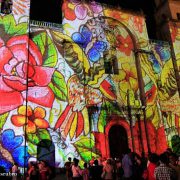 Are you planning a visit to Merida, the historic state capital of the Yucatan? If you are, don’t miss the video mapping projections in the main square. First up is Casa de Montejo, the residence of the Montejo family, the founders of Merida, where A Meeting of Two Worlds: Dialogue of a Conquistador is screened on Wednesday evening at 8:30 p.m. This tells the story of the Conquest of the Yucatan by Francisco de Montejo “El Adelantado” and the fate of the Maya. The projection is narrated by a guide and is followed by a jarana folk dance performance.

The imposing San Ildefonso Cathedral is the backdrop for the next video mapping on Friday at 8:30 p.m. Sacred Stones tells the story of the founding of Merida amidst the ruins of a much earlier Maya city called T’ho and the construction of churches, convents and mansions during the Colonial period.

There is another video mapping projection at the Monumento a la Patria on Paseo Montejo. All three video mapping events are free of charge.

Also on Friday and Saturday evenings is Noche de Leyendas, a walking tour to watch street theater that makes the history of the colonial city come alive. The tour starts outside Peon Contreras Theater at 9 p.m. Tickets must be purchased two hours before the show begins.