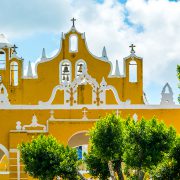 Fiesta de Nuestra Señora de Izamal, August 15, Izamal
Masses, processions, traditional dances and music in Izamal, a historic town in the Yucatan famous for its colonial convent and surrounding buildings all painted in bright yellow with a white trim. Izamal shares the distinction of being one of the Yucatan’s twin Pueblos Magicos or “Magical” Towns with Valladolid, a name given to smaller Mexican communities that are rich in history and traditions or are the site of natural wonders.

168th Anniversary of the Settlement of Isla Mujeres, August 17
Isla Mujeres celebrates its anniversary in August, 168 years since the first settlers in the modern era founded the village of Dolores. Isla Fest events include processions, dance performances, live music and more.

6th Cancun International Festival of Music, Cancun, October 18 to 27
More than 300 musicians of 12 nationalities will take to the stage during the festival. Different musical genres and venues.

This year, the Mexican state of honor is Aguascalientes, also famous for its textiles and embroidery. The guest country is India, another nation rich in traditions that is home to ancient cultures dating back thousands of years.

Festival de Vida y Muerte, Xcaret Park, October 30 – November 2
Hosted by Xcaret Park, the Festival of Life and Death Traditions showcases one of Mexico’s richest and most colorful customs, the Day of the Dead or Día de Muertos, which takes place on November 1 and 2. At this time of year, Mexicans believe that the souls of the departed come back to the world of the living for a short time. They welcome their loved ones with altars laden with flowers, food, treasured possessions and other offerings, and with candlelit vigils, masses and serenades.

OHL Classic at Mayakoba, PGA golf in the Riviera Maya, November 5 -11, 2018
A field of players that includes some of the PGA’s leading young players and former champions gathers for the OHL Classic at El Camaleón Golf Club in Mayakoba.

10th Xel-Ha Triathlon, Xel-Ha, November 17-18
Over 2,000 triathletes are expected to compete in this year’s Xel-Ha Triathlon. The money raised from this event is donated to Flora, Fauna y Cultura de Mexico, A.C. to support conservation projects.