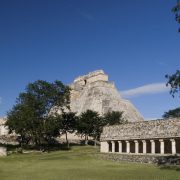 Archaeologists working for the National Institute of Anthropology and History (INAH) have made several major discoveries at three of the Yucatan’s archaeological sites: Chichen Itza, Uxmal and Kuluba.
At Uxmal, archaeologists discovered a hidden passageway under the Palacio del Gobernador dating from AD 670 to 770 and built in the Early Puuc architectural style. Together with the remains of arches and three stairways, this secret tunnel changes the history of the building and the site and may have been used to conceal ancient rulers in times of strife.
During recent excavations at Chichen Itza and using Lidar sensing technology, archaeologists discovered five clusters of buildings in the forest between Las Monjas and Templo del Serie Inicial in the area known as Chichen Viejo. Four of the groups appear to be residential areas but the fifth is a small pyramid 5 meters high
They also found and restored a stone table in the Casa de los Caracoles depicting bound captives surrounded by warriors.
Additional restoration in the Temple of the Warriors revealed a rare pyrite disc that was part of an offering dating from the Early Post-Classic period (AD 850 to 1200).
This follows news of Chichen Itza discoveries earlier in 2019 when the Gran Acuifero Maya exploration team led by Mexican archaeologist Guillermo de Anda was exploring a cave system near the ancient city. As they explored Balamku, the Cave of the Jaguar God, they found seven chambers filled with offerings of pottery, including incense burners in the form of the central Mexican rain god Tlaloc.
The final discovery of 2019 was at the archaeological site of Kuluba in the district of Tizimin, eastern Yucatan. This site is not open to the public yet as archaeologists are still exploring and restoring the buildings that emerge as they clear the undergrowth. During their work in the C Group of buildings, they discovered a palace to the east of the plaza that is 55 meters long and 6 meters high. From the artifacts recovered in the building, it appears to have had two phases of occupation: during the Late Classic period AD 600-900 and the Terminal Classic period AD 850-1050.
Archaeologists think that Kuluba may have been conquered by Chichen Itza in the Terminal Classic period.
[Source: INAH]