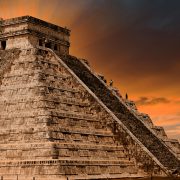 Anniversary of the Founding of Merida, January 5-6

On the evening of January 5 and on January 6, inhabitants of Merida, state capital of Yucatan celebrate the anniversary of the founding of the city in 1542 by Spanish conquistador Francisco de Montejo, 478 years in 2020. Observed with serenades to their beloved city by local guitar trios, a procession and mass, it marks the start of the month-long City Festival, a gala event featuring concerts, dance performances, art exhibits and more.

Merida is called the cultural capital of the Yucatan and the Merida Fest in January is one of its most important events. The program features 130 events celebrating music, dance and art in 30 different venues with the participation of 650 artists.

This traditional fair is dedicated to the patron saint of Valladolid, the Virgen de la Candelaria. Events include an agricultural fair, processions, concerts and dances.

More than 146 years of tradition come to the fore in February as islanders celebrate the Cozumel Carnival.

The famous light and shadow serpent of Kukulcan appears on El Castillo Pyramid at Chichen Itza and descends from the heavens at sunset on the day of the Spring Equinox (March 19-21). It is also visible the day before and after, cloud cover permitting.
Elsewhere in the Yucatan, at dawn on the day of the Equinox the rising sun appears through the doorway of the Temple of the Dolls in the ancient city of Dzibilchaltun to the north of Merida.
The spring equinox officially falls on March 19 in 2020 but the largest gathering at Chichen Itza takes place on March 21, a national holiday in Mexico.

Cancun is gearing up to celebrate its 50th birthday on April 20 and City Hall is planning a series of events – including sporting events and music festivals – over the next few months. More details coming soon.