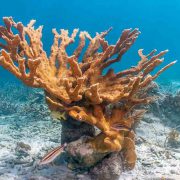 The National Fisheries Institute Research Center (INAPESCA-CRIAP) in Puerto Morelos is raising corals to be transplanted on reefs that have been damaged by storms or human activity and to replenish disappearing coral colonies. Biologists working at the center recently planted more than 3,500 fragments of elkhorn and staghorn coral and other stony corals on reefs in the Akumal area.

The project goal is to transplant 265,000 corals on Mexican Caribbean reefs in six years. Biologists are focusing their efforts on species such as elkhorn and staghorn coral, which are the reef builders.

The technology developed by Inapesca and its strategic partners has the capacity to produce up to three thousand coral colonies per day. Project Director Claudia Padilla estimates that the laboratory will produce 48,000 fragments of 13 different species of coral in 2019, and 60,000 in the next three years.

The project has the support of the Quintana Roo State government and to date 12 reef sites have received coral fragments, including Manchones and Cuevones reefs in the bay between Cancun and Isla Mujeres and Tanchacte in Petempich Bay to the north of Puerto Morelos. The center has also established four submerged coral nurseries in Contoy, Isla Mujeres, Cancun and Playa del Carmen.

Coral reefs are under threat worldwide from rising sea temperatures and coral bleaching, pollution, overfishing and boat collisions. As coral colonies weaken they also become prone to illnesses such as the stony coral tissue loss disease, which has spread from Florida through the Caribbean and appears to affect 20 species of coral, including pillar, and star brain corals.