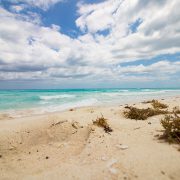 You may be wondering about seaweed and whether it is washing ashore on the beaches in the Riviera Maya. We are already seeing some sargassum landings this season, as we did in 2018. However, it is important to note that landings occur from time to time and that not all beaches are affected.
The authorities are monitoring satellite imagery to forecast when patches of seaweed may approach the coast. The Federal government has designated the Navy to coordinate the beach cleaning campaign.

It is natural for seaweed to wash up on the beach from season to season, after storms and in the summer heat. However, in recent years we have been seeing larger quantities of two species of seaweed known as Gulfweed or Sargassum (Sargassum natans and Sargassum fluitans) coming ashore in the Riviera Maya, Cancun and other parts of the Mexican Caribbean. Similar landings occur in the Caribbean islands, West Africa and along the Gulf coast of the United States, including Florida.

The word Sargassum comes from the Portuguese word sargaço, which means “little grapes,” a reference to the air-filled bladders that enables this species of seaweed to float on the surface and move with the currents. Unlike other algae that are rooted in the seabed or attached to rocks or corals, pelagic or free floating sargassum or sargasso can grow and reproduce as it drifts through the water.

Pelagic Sargassum is historically associated with the Sargasso Sea in the North Atlantic Ocean where vast patches of it are a habitat for marine life such as microscopic plants, shrimp, crabs, sea horses, baby fish and turtles.

Sometimes ocean currents transport lines or patches of this seaweed to areas beyond the Sargasso Sea. However, biologists believe that the sargasso that is affecting the Caribbean region and the coast of Quintana Roo has a different source, thousands of kilometers to the south. The seaweed is now flourishing in a second area off the coast of Brazil in the tropical Atlantic. Mats of it drift on ocean currents and are dispersed throughout the Caribbean.

Why has there been so much of it in recent years?

The causes of the seaweed proliferation or blooms have been attributed to climate change, which is triggering rising sea temperatures, and the presence of excessive nutrients in the water. Organic matter, fertilizers and other chemicals in runoff from the Amazon River and its many tributaries (and from coastal areas of other countries the seaweed passes on its journey north) provide the elements for the seaweed to thrive on.

What is being done to clean the beaches?

In the Mexican Caribbean, a campaign has begun to collect seaweed when it lands on public beaches. Brigades are working in Xcalak and Mahahual, Playa del Carmen and other areas. The Mexican government has designated the Mexican Navy to coordinate beach cleaning initiatives this year. The Quintana Roo State government divided the coast into nine sectors in which many hotels and resorts will have their own cleaning programs and will also work together with the authorities and there are volunteer beach cleaning initiatives too. In addition to beach cleaning brigades, floating barriers may be installed along certain stretches of coastline susceptible to sargassum landings in order to deflect it and reduce the amount coming ashore. Specially equipped boats will also collect the seaweed while at sea.
When seaweed accumulates in the shallows it begins to decompose, giving the water a brown tint and pungent odor. As it breaks down, it reduces the amount of oxygen in the water and blocks the sunlight that sea grass and coral reefs need for growth. This can weaken coral communities, making them more vulnerable to disease, and harm fish and other marine life.

In Puerto Morelos, the local authorities, hotels, conservationists and biologists from the UNAM (National University of Mexico) research station joined forces and have emitted the Puerto Morelos Protocol on the best ways to collect seaweed and dispose of it.
Hotels to the north of town are studying the possibility of installing floating barriers and boats to clean up the seaweed before it reaches the coast.
Brigades of workers will remove seaweed that has already washed up and it will be transferred to a single landfill site, which must be covered with a geo-membrane to prevent salt and organic seepage contaminating the water table as the seaweed dries out.
Possible uses for the seaweed collected are also being studied. If properly processed, it can be used as a fertilizer, in the food, pharmaceutical, textile or construction industry or for biofuel. Some local companies are experimenting with making paper, cardboard and containers from seaweed. One Puerto Morelos ecologist has even built and donated houses for low-income families made with bricks containing compressed seaweed.

At Grand Residences by Royal Resorts to the south of Puerto Morelos, a mechanized beach sweeper operates six hours a day if needed. The resort’s team of gardeners is also on call to offer additional support should it become necessary.

It is turtle nesting season and the rules limit the use of heavy machinery on dry sand to prevent it from compacting or causing irreversible damage to turtle nests and eggs. Tractors can only be used on the shoreline where the waves break and during the morning, not in the evening.
All along the coast, turtle patrols are keeping an eye on adult turtles coming ashore to nest on beaches at times when there are seaweed landings. They will also watch over the hatchlings as they are born later in the season to ensure that they do not become entangled in it.

• Seaweed washes up on the beach naturally
• Seaweed is an important habitat for marine life
• The presence of seaweed does not mean that the beach is polluted
• You can still swim in the sea but with care. Avoid large patches of seaweed
• Showering after swimming is recommended
• Rinse out your swimsuit after use
• Seaweed will not sting you. However, microscopic creatures or insects may be trapped in the weed and can occasionally irritate the skin, hence the recommendation to rinse off after sea bathing

We hope that this information is useful. Further updates may be published during the summer on the blog at www.grandresidencesbyroyalresorts.com