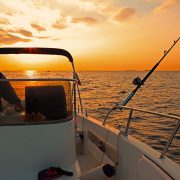 Calling all fishermen out there, mark your calendars. March is the start of the sport fishing season in the Mexican Caribbean.

The fastest predators in the sea, reaching speeds of over 68 miles an hour, sailfish and marlin move through area waters in the spring and summer in pursuit of huge shoals of migrating sardines, anchovies and mackerel. Snapper, dorado, bonito and wahoo are also plentiful and your captain and crew will take you right to where the fish are running.

Puerto Morelos and the Cozumel Channel

You don’t have to go far from Grand Residences to cast your line as some of the area’s best fishing grounds are right offshore from Puerto Morelos and south along the Riviera Maya coast. Marked by a line of indigo-colored water, an ocean trench called the Cozumel Channel runs between the coast and the island of Cozumel and is used by migrating big game fish.

Other boats head for the Arrowsmith Bank east of Punta Cancun, an underwater plateau rich in marine life.

Just off the north coast of Quintana Roo in the Gulf of Mexico, the island of Holbox is another good place for fishing enthusiasts. After a day at sea, local fishermen are happy to sit on the beach at the end of the day and share stories of their lifelong quest for the biggest fish.

Hidden in the mangroves, the shallow lagoons that stretch along the Quintana Roo coast offer a different challenge – they are rich in bonefish such as tarpon, permit and snook and attract fly fishermen from all over the world. There are fishing lodges in the Boca Paila area and Punta Allen in the Sian Ka’an Biosphere Reserve. Holbox and the Isla Blanca wetlands around Laguna Chacmochchuc to the north of Cancun are also good spots.

Local marinas adhere to the catch and release policy to help conserve fish stocks and we urge you to join their campaign. The thrill of being out on the waves in pursuit of sleek marlin and sailfish should be enough and we hope that you will liberate any game fish you catch.

If you enjoy fishing and are planning a day out on the high seas or want to go bone fishing, the concierge will help you organize fishing trips and boat charters.