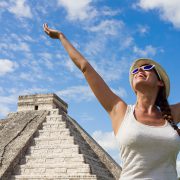 As the sun sets in the west and the shadows lengthen in the ancient Mayan city of Chichen Itza, a collective gasp of amazement goes up from thousands of people who gather at the foot of the Pyramid of Kukulcan on the spring equinox in March. They are witnessing an incredible sight, the mysterious shadow of a serpent rippling across the stone, the symbol of an ancient deity returning to earth.

Also known as El Castillo, the Pyramid of Kukulcan is a feat of ancient engineering and a solar clock, aligned to catch the rays of the setting sun on the days of the spring and fall equinoxes in March and September. Triangles of light and shadow form along the side of the north staircase and the figure of a snake appears, merging with the head of a stone snake at the foot of the pyramid. The illusion is created of a gigantic serpent slithering down from the heavens and across the plaza in the direction of the Sacred Cenote.

The snake symbolizes Kukulcan (also known as Quetzalcoatl in central Mexico), the feathered serpent god, who returns to earth to give hope to his followers and heralds the time for spring planting and fall harvest for the Maya.

Your Concierge can help you arrange a day trip to the UNESCO World Heritage Site of Chichen Itza for the Equinox, or at any other time of the year.   The spring equinox officially falls on March 20 in 2019. The light and shadow snake is visible the day before and after the equinox, cloud cover permitting.

Chichen Itza is not the only Mayan ceremonial center in the Yucatán to have temples with solar, lunar or planetary alignments. The doorway of the Temple of the Seven Dolls at Dzibilchaltun (13 miles north of Mérida) makes a perfect frame for the rising sun on the day of the Equinox.

Guide to great fishing spots in the Mexican Caribbean

The place of the turtles, a day in Akumal
Scroll to top