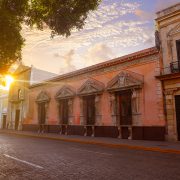 This traditional fair is dedicated to the patron saint of Valladolid, the Virgin de la Candelaria. Events in this colonial town include an agricultural fair, processions, concerts and dances.

Dining under the stars