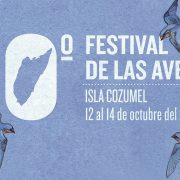 The Maya Day of the Dead is called Hanal Pixán, which means “feast of souls.” Throughout the Yucatán, families make the pilgrimage to the cemetery to visit the graves of their loved ones and erect altars to honor the souls of children and adults.

You can see traditional Mayan altars on display at the Cancun Maya Museum and Las Palapas Park in Cancun, in Playa del Carmen, Valladolid, Izamal and in Mérida. In Merida there is also a procession to the city cemetery called Paseo de Las Animas.

A field of players that includes some of the PGA’s leading young players and former champions gathers for the OHL Classic at El Camaleón Golf Club in Mayakoba.

Over 2,000 triathletes are expected to compete in this year’s Xel-Ha Triathlon. The money raised from this event is donated to Flora, Fauna y Cultura de Mexico, A.C. to support conservation projects.

Playa Mamitas in Playa del Carmen will be the venue for one of the year’s most popular events, the Riviera Maya Jazz Festival. The festival program has yet to be announced. The festival line up includes Norah Jones and Bobby McFerrin.

Merida’s many museums and art galleries will be open late during the Noche Blanca and there will be concerts and other cultural events for city dwellers and visitors to enjoy.

The patron saint of Mexico is honored nationwide with serenades of “Las Mañanitas,” the traditional birthday song the evening of December 11, offerings of fragrant flowers, pilgrimages and masses.

Check during the year for more information on upcoming events in Cancun, Riviera Maya and Yucatan.