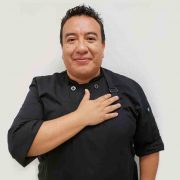 We have some Grand Residences dining news for you this month. Chef Yann Cozic has decided to return to France to pursue his dream of opening a bistro in his hometown Le Mans. Chef Cozic has been with us since the beginning at Grand Residences and presided over the opening of our three restaurants. We are sad to see him go and we are sure that you will want to join us in wishing him bon voyage and every success for the future.

We want to introduce you to your new chef Guido de la Mora. We are excited to welcome him to the Grand Residences family and are sure that he will delight you with his sublime flavors and attention to detail.

Originally from Toluca, State of Mexico, Chef de la Mora studied a degree in Ethnomusicology at the National School of Music before deciding to concentrate on his first passion: cuisine. He studied a two-year Diploma in Culinary Arts at the University of the State of Mexico and followed that with master class courses in vanguard cuisine and molecular cuisine at Michelin star restaurants in Spain, and in Mexican and Thai cuisine.

Chef de la Mora’s career has taken him all over the world and he has worked at top restaurants and luxury hotels in Barcelona, Dominican Republic, Barbados, Curaçao, Miami, Kuwait, Qatar and the Riviera Maya, Mexico. Additionally, he has travelled to France, India, Thailand and Philippines to study different cuisines and to California for wines.

He is a senior member of the Emirates Culinary Guild (Dubai) and a member of Les Toques Blanches Association. He was the runner up in the Dish of the Riviera Maya competition in Cancun and the Cornella Gastronomic Contest in Spain. He has also been a judge and exhibitor in cooking competitions held at universities in Cancun, Riviera Maya and Bridgetown, Barbados.

Stay posted for an interview with Chef Guido de la Mora in the next edition of this newsletter.