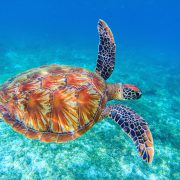 How are the turtles doing this summer? It’s a slow season so far with 10 turtles coming ashore to lay eggs on the beach in front of the resort to date, and the eggs in two nests set to hatch in the next few days.

The number of nests at the three Royal Resorts in Cancun where turtles come ashore is also lower than 2017 and stands at 60 nests as of July 24. All are green turtle nests with the exception of six containing eggs laid by loggerhead turtles and one with hawksbill turtle eggs.

Turtle nesting is cyclical; a busy turtle season like 2017 is invariably followed by a slower year. This seems to be the case in the Mexican Caribbean so far this summer with the numbers of nesting turtles reported at different locations along the coast being lower than last year.

What’s on the menu?

Meet the team
Scroll to top