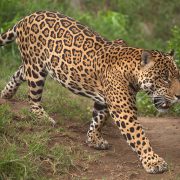 At an international conference on jaguars and other tropical felines found in the Americas held in Cancun, June 8 -15, Mexico shared some important information about the country’s population of jaguars. The Second National Jaguar Census revealed that there are around 4,800 jaguars in Mexico, an increase of 20 percent over that reported in 2010.

Located along jungle trails used by wildlife or near water sources, the camera traps detect motion and take photos of jaguars, pumas and other creatures that pass by. For 60 days, the census cameras took photos of 20 different species, including peccaries, deer, agouti and wild turkey, all important prey animals for jaguars and pumas.

The survey results reflect heightened efforts to protect the jaguar, the largest feline in the Americas. The creation of new reserves in Mexico, improved coordination and census techniques, reforestation and increased awareness about the dangers this magnificent creature faces from habitat loss and illegal hunting are helping but more work is needed to bring this big cat back from the brink of extinction.

The creation of biological corridors linking reserves where jaguars are known to roam can help, as can reforestation, the protection of important swathes of forest under threat from development and wildlife underpasses on highways. Biologists are also working with rural communities and ranchers that see jaguars, pumas and ocelots as a danger to their livestock.

The largest populations of jaguars are found in southeast Mexico, in the jungles of Quintana Roo, Campeche and Chiapas.