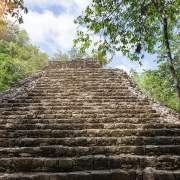 From the jungle to the sea, the Riviera Maya’s archaeological sites are full of contrasts. Here are three that you could visit in one day, but we recommend them as experiences to be enjoyed slowly, at your own pace.

Head inland to the ancient city of Coba (25 miles/41 km from the coast), one of the Maya World’s largest archaeological sites.

Cobá is famous for the sacbes or Mayan roads that radiate from the heart of the city. The longest sacbe in the Maya World links the city with the site of Yaxuná, near Chichén Itzá and is 101 km long.

During your walks along jungle trails past temples that still lie under vines and foliage, you’ll see some of the creatures that make their home in Coba. They include huge iridescent blue morph butterflies, turquoise-browed motmots, parrots and shy agoutis, terrier-sized rodents that scuttle through the undergrowth.

An inscription on a stela or standing stone found at the site reveals that Tulum was inhabited as far back as A.D. 564 although it reached its peak during the Post-Classic period (1250–1521) as a port on the sea and land trade routes.

The principal building at Tulum is a temple known as El Castillo; other important groupings are the Temple of the Descending God, Temple of the Frescos and the House of the Columns.

Spend a few minutes taking in the breathtaking views of the temples, the bay at the foot of the cliff that was once used by Maya seafarers, and the coast north and south.

About 20 minutes to the south of Tulum via Highway 307, the archaeological site of Muyil, also known as Chunyaxche, is on the shores of a lagoon in the Sian Ka’an Biosphere Reserve. Once a Maya trade center, it received goods brought by canoe from the Caribbean and shipped them overland to other cities in the Yucatan.

Combine a Muyil visit with an unforgettable boat trip through the Sian Ka’an wetlands to see birds, crocodiles and other wild creatures.

Your Concierge can help you organize trips to the archaeological sites in the Riviera Maya and Yucatan.

Wine of the month
Scroll to top