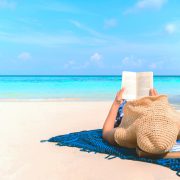 Here is our beach book recommendation for June. Why not write to us and let us know what’s on your bookshelf or Kindle right now?

The City of Light is the setting for the story of Tariq, a 19-year-old Moroccan immigrant who is searching for traces of his dead mother and his French Algerian heritage, and Hannah, an American postgraduate researching the wartime experiences of women in occupied France.

Their narratives reveal different perspectives and experiences of Paris, Tariq is working in an Algerian fried chicken shop and exploring the Paris Metro where he meets an old puppeteer called Victor Hugo. Hannah is unlocking the past through the memories of the old women she interviews and the documents she reads in the archive about the wartime internment and deportation of French Jews, while also coming to terms with a failed romance when she lived in the city 10 years earlier.

Tariq ends up as Hannah’s lodger and is drawn into her research as he helps her translate documents and acts as an interpreter. At the same time, he discovers the history of the French occupation of Algeria and the persecution of Muslim Algerians in Paris during the turbulent post-war period.

Sebastian Faulks’ love of Paris shines through. This book evokes the city’s history on every boulevard and in every square. From the vibrant immigrant neighborhoods to St. Germain des Pres and Le Marais, the city holds endless surprises for Tariq and clues and connections for Hannah.

If you run out of beach books, you’ll be able to stock up at Alma Libre right here in Puerto Morelos. Located on the main square, this iconic bookstore has a good selection of new and second-hand books in English and Spanish. Open from 10 a.m. to 3 p.m.

The Travel Gallery
Scroll to top