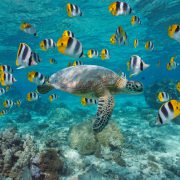 Slip beneath the waves and there is a whole new world awaiting discovery in the depths. Are you ready for a glimpse of the Caribbean’s coral kingdom? From Cancun and Isla Mujeres to Puerto Morelos, the Riviera Maya and Cozumel, the Mesoamerican Reef is ready to reveal its wonders. Divers will already be acquainted with the amazing reefs that comprise the world’s second longest coral reef system, but if you have never taken the plunge, how about planning a snorkeling trip on your next visit. It will be the beginning of a whole new love affair with the Mexican Caribbean, and it starts right here in Puerto Morelos.

One of the richest areas of the Mesoamerican Reef in terms of marine life, Puerto Morelos Reef is a National Marine Park. There are two marine biology research stations on the outskirts of town where scientists study fish populations, coral health, algae, and are also reproducing coral colonies to be transplanted to damaged reefs along the coast.

Local dive masters know all the best places in the National Park for snorkeling and scuba adventures. You’ll see shoals of blue tangs, blue-striped grunts and porkfish and colorful parrotfish. Larger fish such as jacks, snappers, hogfish, grouper and barracuda gather above the corals, and keep a look out for sea turtles, spotted eagle rays, nurse sharks and octopus.

Look closer and you’ll see smaller fish such as squirrel fish and damsel fish guarding their territory among the corals, hiding in crevices or in the sea grass.

After many a happy hour exploring the Puerto Morelos reefs, venture further south to discover more underwater treasures.  Here are three great options for a snorkeling trip, all a haven for colorful reef fish and other marine life. 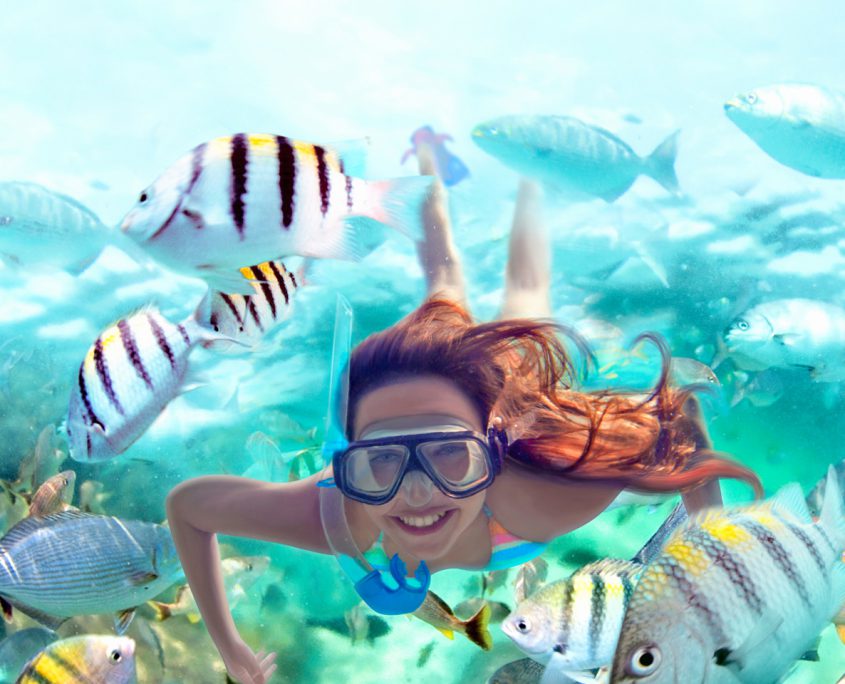 A chain of turquoise inlets, lagoons and crystalline cenotes fed by underground springs and surrounded by emerald-green forest and mangroves, Xel-Ha is one of Mexico’s wonders and a huge natural aquarium.

Submerged concrete reef balls in different areas of the inlet provide an additional habitat for fish and are being colonized by corals and algae. Xel-Ha Park also has a project to replenish fish populations in the lagoon and to raise the endangered Queen conch.

Venture further into the forest and swim in the cenotes or sinkholes where you’ll see different species of silvery freshwater fish, tropical butterflies and dragonflies.

Walk across the floating bridge at the mouth of the inlet for a breathtaking view of the lagoons and the Caribbean. Watch the waves break and larger fish such as groupers, barracudas, red, mutton and yellow tail snappers and horse-eyed jacks as they swim under the bridge.

Apart from hours of snorkeling there is much more aquatic fun to enjoy, including oversized inner tubes for floating on the lagoon, zip lining splashdowns and rope bridges. And be sure to climb the 30-meter-high lighthouse for panoramic views of the Riviera Maya coast before descending with a splash on the spiral water slide.

Xel-Ha has restaurants, bars, gift shops, rest rooms, showers and lockers. For an additional charge you can swim with dolphins, manatees or stingrays, try snuba (a combination of snorkeling and diving in a cenote) or sea trek your way across the seabed. 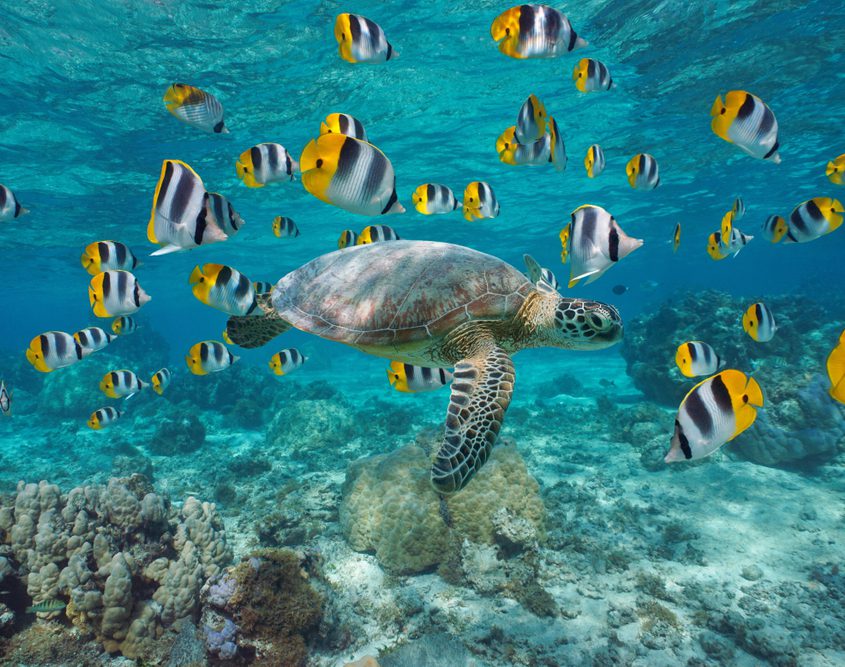 With its palm-lined beach, gentle waves, thatched roof palapa bars and restaurants you’d think that picturesque Akumal Bay had charms enough, but there’s much more below the surface. The offshore reefs are great spots for diving and snorkeling.

Marine life is varied and abundant in Akumal, even in the shallows. Royal grammas, spotted drums and damselfish dart through the corals and parrotfish and eagle rays are frequently observed. The greatest thrill of all, however, is to spot a green or loggerhead turtle grazing on the sea grass. Watch from a distance, do not approach, or make a noise and it may swim past you, giving you the chance to see the beautiful markings on its shell. A vacation memory to treasure, no wonder Akumal means “place of the turtles” in Maya.

There’s more snorkeling to the north in Half Moon Bay or Bahia de la Media Luna where the corals are much closer to the shore. You’ll need reef shoes here because the seabed is rocky. 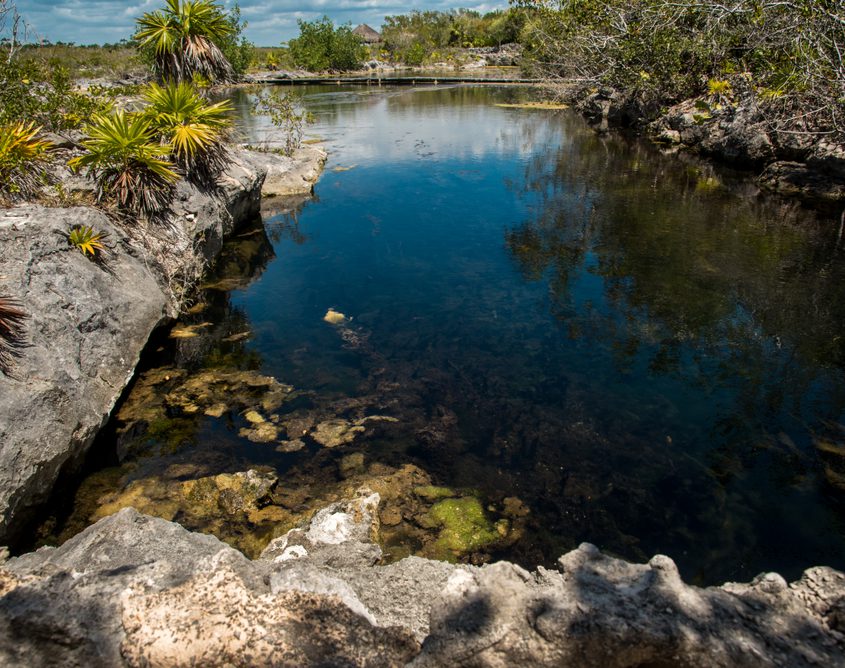 Follow the coast road north from Akumal past Half Moon Bay to the shores of Yalku lagoon, another turquoise caleta that is a popular snorkeling spot. A local cooperative manages Yalku and charges a fee for admission. The use of life jackets is obligatory and there are changing rooms, showers and an open-air cafe.

As you explore the cool, crystal-clear waters of this inlet you’ll soon have an impressive list of fish sightings. Sergeant majors, porkfish and butterfly fish patrol the shoreline; there are puffer and triggerfish, angelfish, shoals of blue tangs and jacks. Looming out of the shadows are solitary barracudas guarding their territory.  Listen carefully and you can hear the parrotfish gnawing at the rock and you may see the camouflaged peacock flounder emerge from the sand.

After snorkeling, sit on the rocks and take in the view. Yalku is a lovely spot, especially early in the morning before it fills up. 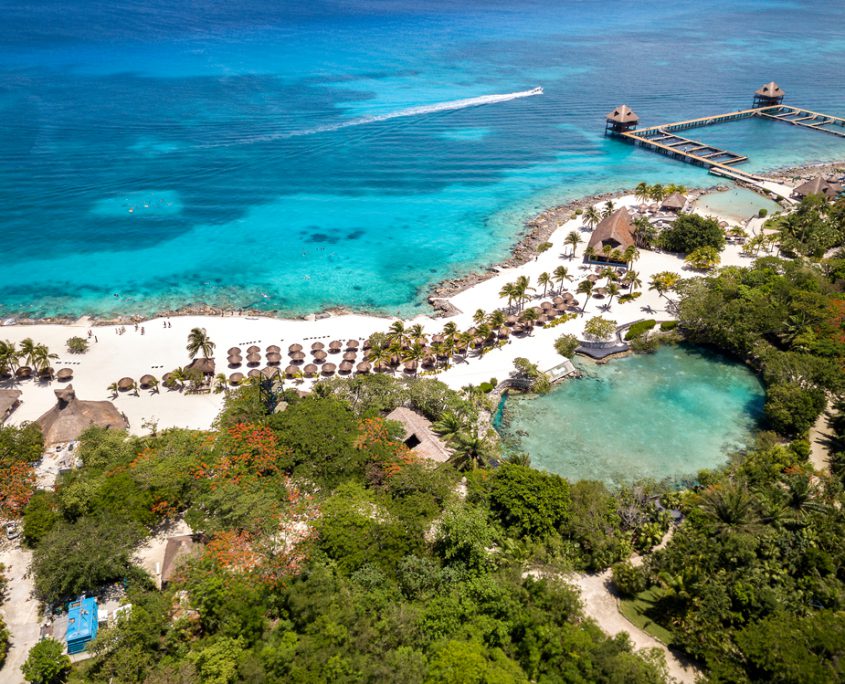 Take the ferry from Playa del Carmen to the island of Cozumel, world-famous for its amazing coral reefs. Chankanaab Park is the spot for your first Cozumel snorkeling adventure.

Swim through the coral gardens of Chankanaab Reef admiring the sea fans, algae and sponges from a distance. Look out for queen and French angelfish, several species of parrotfish, trunkfish and shoals of sergeant majors, grunts and jacks.

Other Chankanaab attractions include a cenote or sinkhole connected to the Caribbean by an underground river, a botanical garden and dolphin swims.

If you would like to explore more of Cozumel’s underwater world, there are glass-bottomed boat trips and the Atlantis submarine, which takes you down to a depth of more than 100 feet to see the glory of the island’s reefs.

At a depth of 50 feet, you’ll see a shipwreck, the Felipe Xicotencatl, now a home for myriad species of fish. Keep a look out for sea turtles and manta rays swimming by. Finally, the submarine will hover over the Wall, the drop off which plunges to a depth of 1,800 feet below you.

Ask the Concierge to help you plan your snorkeling adventures in the Puerto Morelos National Park and to Xel-Há, Akumal and Yalkú and Chankanaab Park on Cozumel.