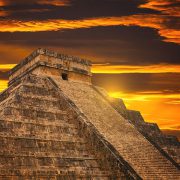 Take a journey in history on your next trip to the Mexican Caribbean by exploring some of the ancient Maya cities that pepper the Yucatan landscape. See temples where priests once performed rituals to honor the gods, observatories where astronomers scanned the night skies looking for portents in the stars and ancient palaces inhabited by mighty rulers. All are wonders of art and architecture, rich in stucco carvings and built to endure the centuries. Here are some of our favorites.

In the state of Yucatan 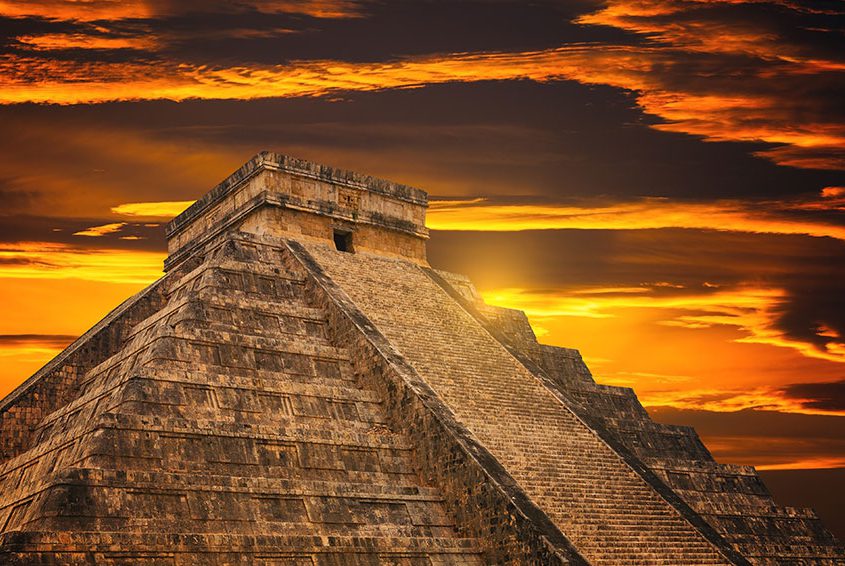 Yucatan’s most famous archaeological site, Chichen Itza is a vacation must. Once a powerful city state, controlling much of the Yucatan Peninsula, it was a vast metropolis and is known to stretch for 20 square kilometers. Only three percent of this historic landscape is open to the public: the area comprising the Great Plaza, the Observatory and Las Monjas. Archaeologists are excavating and restoring many more temples in the surrounding forest.

The Great Plaza is the site of the Pyramid of Kukulcan (famous for the light and shadow spectacle that creates the the figure of a serpent on the day of the spring and fall Equinox in March and September), the Temple of the Warriors, Temple of a Thousand Columns, Tzompantli, Temple of the Jaguars and the Ball court, the largest discovered to date in Mesoamerica. From this sacred square it is a short walk to the Sacred Cenote, the Ossuary, the Observatory and Las Monjas. These majestic temples have earned Chichen Itza a place on the UNESCO World Heritage list. 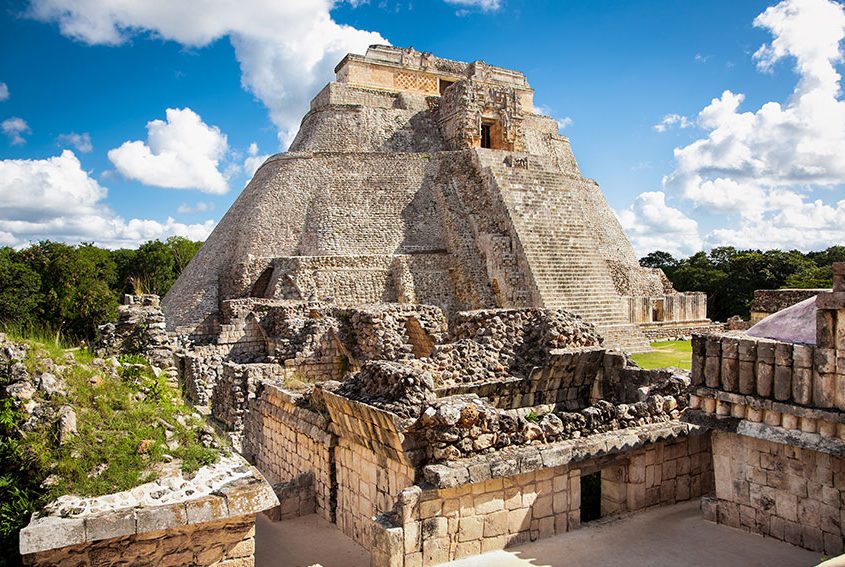 An hour’s drive south of Mérida, Uxmal is one of the loveliest ancient cities in the Maya World. During the Late Classic period (A.D. 600-900), it was a regional capital, controlling southwest Yucatán and a chain of smaller cities referred to as the Puuc Route: Kabah, Sayil, Xlapak and Labná.

Apart from location, these sites share a unique architectural and artistic style called Puuc. In recognition of their outstanding cultural worth, UNESCO declared them a World Heritage area in 1996.

Highlights at Uxmal are the Magician’s Pyramid, the Nuns’ Quadrangle, a gracious courtyard surrounded by four palaces with magnificent friezes, and the impressive Palace of the Governor which crowns a mound and platform overlooking the site. Other buildings of note are the Temple of the Birds, the Great Pyramid, The House of the Turtles and El Palomar. 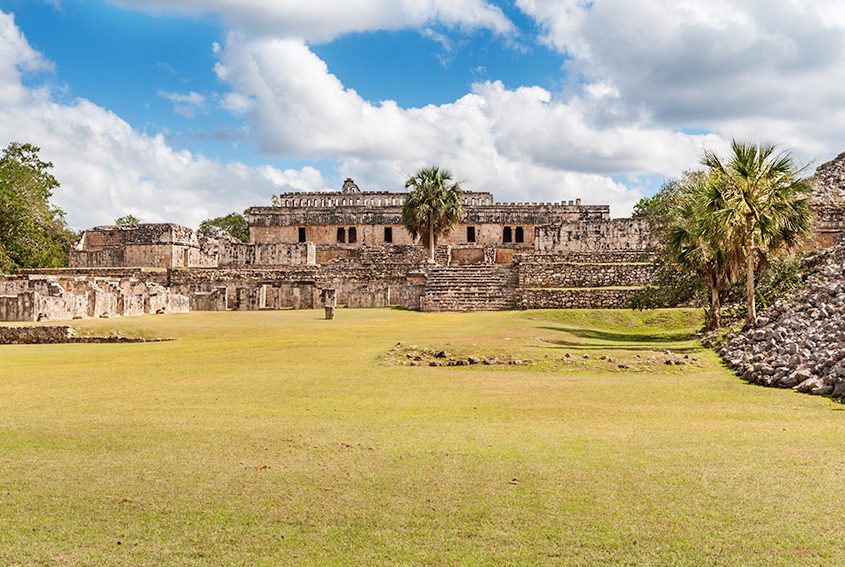 Thirty minutes south of Uxmal, Kabah is the second largest site in the Puuc hills and was one of its vassals. It is famous for the Codz Pop, or the Palace of the Masks, a name that does justice to its magnificent façade consisting of 250 masks depicting Chaac, the Mayan rain god. 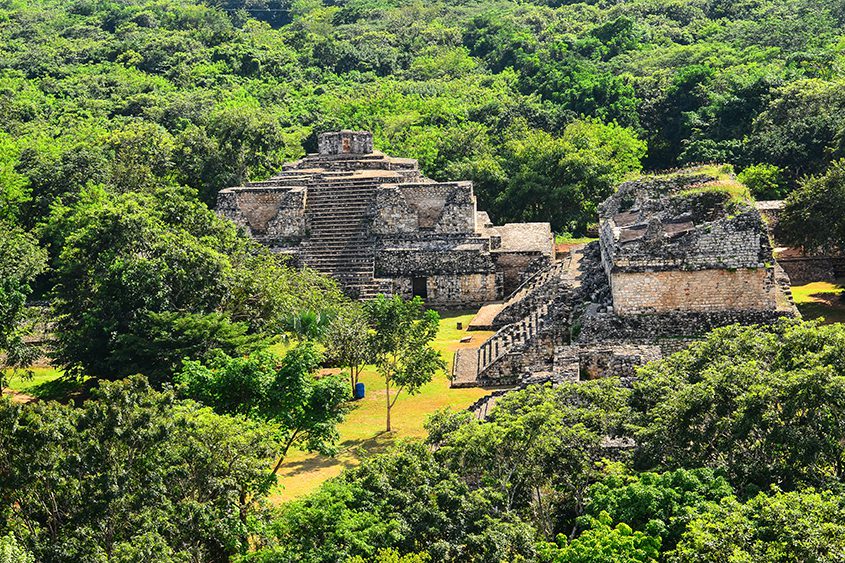 A 20-minute drive to the north of Valladolid is the ancient city of Ek Balam, which means “black jaguar or star jaguar” in Maya. The city flourished between A.D. 250-1200 and its crowning glory is the façade on the upper level of the Acropolis, the principal building, which features the magnificent stucco figure of an ancient lord thought to be the first ruler of the city. The figure’s ornate feathered headdress resembles wings and has led many people to refer to him as “el angel” or the angel.

In the state of Quintana Roo 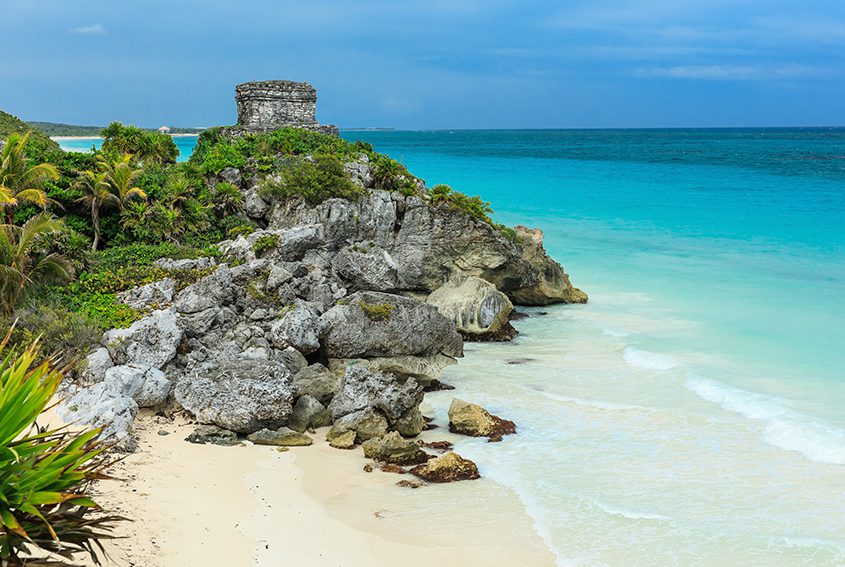 An inscription on a stela or standing stone found at the site reveals that Tulum was inhabited as far back as A.D. 564 although it reached its peak during the Post-Classic period (1250–1521) as a port on the sea and land trade routes. The principal building is a temple known as El Castillo; other important groupings are the Temple of the Descending God, Temple of the Frescos and the House of the Columns. 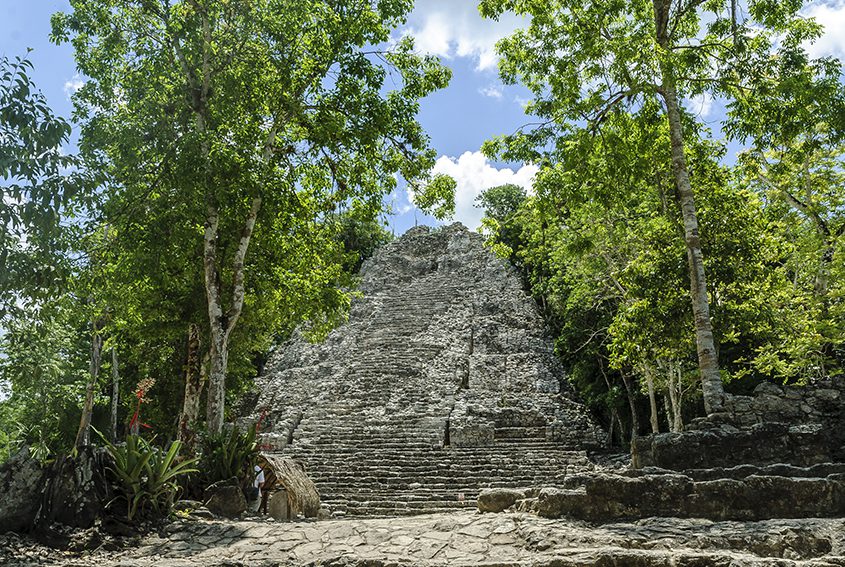 From Tulum on the Riviera Maya coast, head inland to the ancient city of Coba (25 miles/41 km from the coast), one of the Maya World’s largest archaeological sites.

Cobá is also famous for the sacbes or Mayan roads that radiate from the heart of the city. The longest sacbe in the Maya World links the city with the site of Yaxuná, near Chichén Itzá and is 101 km long. 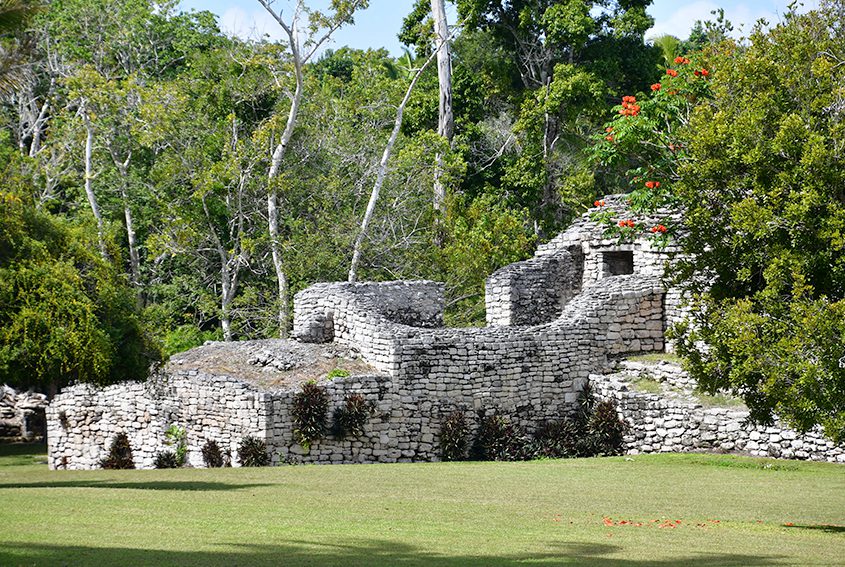 The most famous archaeological site in southern Quintana Roo, 60 kilometers to the west of Chetumal via Highway 186, Kohunlich was first reported in 1912 by Raymond Merwin. The name “Kohunlich” is derived from the English words “cohune,” a native palm tree, and “ridge.”

Excavation work has revealed that the city was founded around 200 B.C. and reached its peak during the Classic period of Mayan history (A.D. 200 – 1000). Building work appears to have ceased around 1200.

Kohunlich is famous for the huge stucco masks that flank the staircase of the Temple of the Masks. Archaeologists believe that they depict the city’s rulers who chose to identify themselves with the sun god, Kinich Ahau, to legitimize their rule. Other important groups of buildings are the Acropolis, the Courtyard of the Stelae, the Palace of the King, Merwin Plaza and the elite residential areas known as the 27 Steps Complex and Pixa’an. 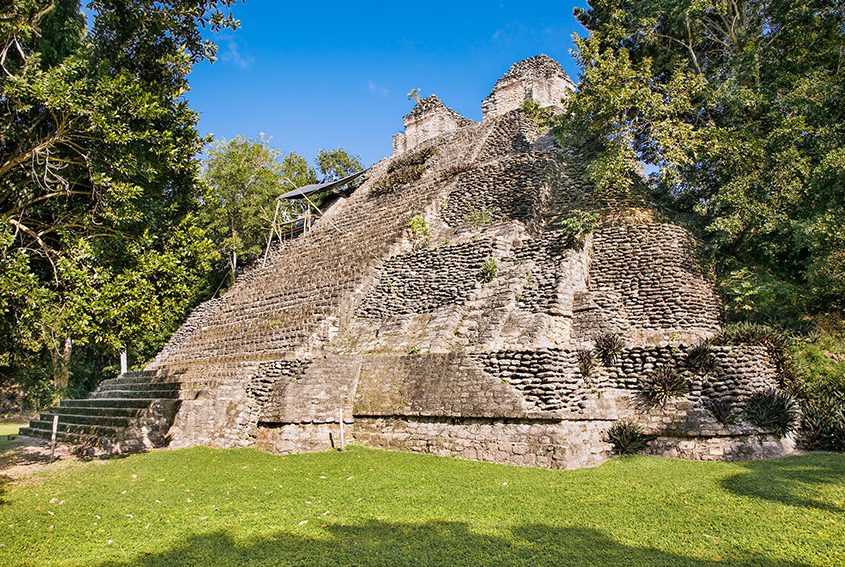 Located in the jungle 81 kilometers northwest of Chetumal via Highway 186, Dzibanche is an ancient city that is still revealing its secrets. Discovered in 1927 by Thomas Gann, Dzibanche means “writing on wood” in Maya, a reference to the calendar inscriptions found on the carved lintel of zapote wood above the doorway to Temple VI.

Experts believe that Dzibanche was the largest and most important city in southern Quintana Roo in ancient times and may have been involved in a power struggle with other city-states in the region such as Calakmul in Campeche. The city reached its peak between A.D. 300 and 1200.

The most important groups of buildings are the Temple of the Lintels; the Gann Plaza, which is flanked by the Temples of the Cormorants, Captives and Toucans; Xibalba Plaza, the site of the Temple of the Owl and the North and South Palaces.

An outlying district of the city, Kinichna (“House of the Sun” in Maya) is located about two kilometers north of Dzibanche and is dominated by a temple called the Acropolis

In the state of Campeche 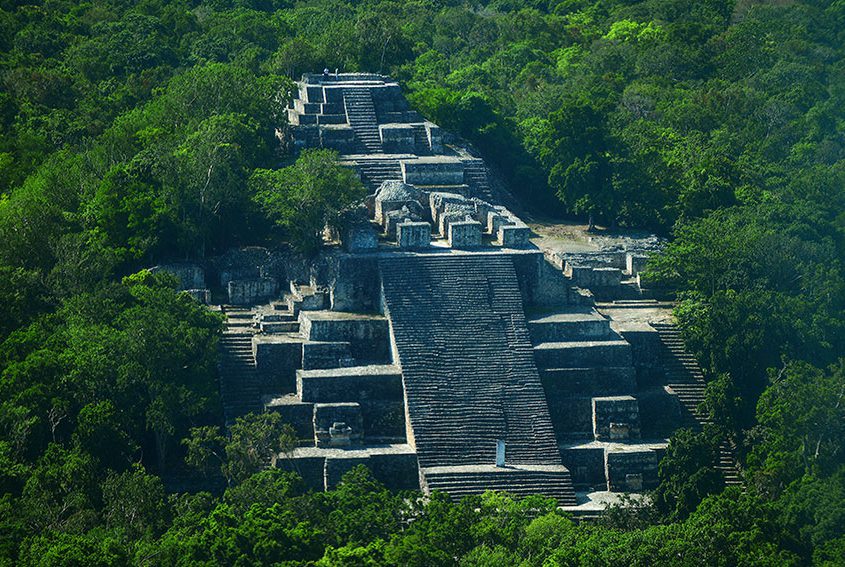 Deep in the jungle of the Calakmul Biosphere Reserve in southern Campeche, close to the Guatemalan border, the ancient city of Calakmul was a major Maya power in the Classic period of Maya history. Its rulers had a bitter rivalry with the city of Tikal and were at war with it for almost a century. The study of hieroglyphic inscriptions carved on Calakmul’s many stelae or standing stones has revealed events including battles, victories, alliances and successions.

Climb the twin pyramids for panoramic views of the forest with the Danta Pyramid at the Guatemalan site of El Mirador visible in the distance. The huge site of Calakmul is also famous for the jade masks found in the tombs of ancient rulers buried deep in temples and palaces.

Calakmul is a UNESCO World Heritage Site and the surrounding jungle is a haven for wildlife, including spider and howler monkeys, deer, jaguar and puma, ocellated turkey, toucans and the rare king vulture. Due to its remote location, guided tours are the best way to explore Calakmul.

In the state of Chiapas 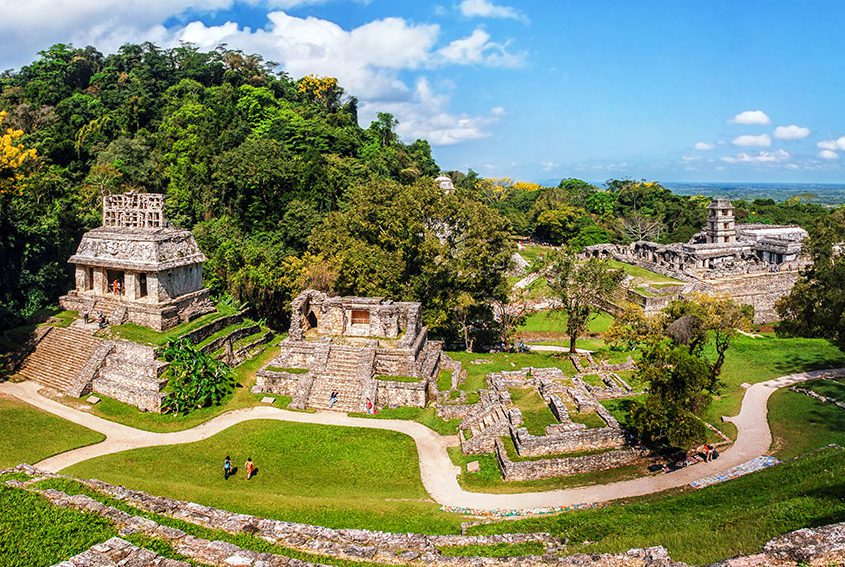 Nestled in the forest-shrouded foothills of the northern mountains of Chiapas, the white citadel of Palenque is one of the most beautiful ancient cities in the Maya World.

A major power during the Classic period of Maya history, it reached its peak during the reign of its most famous ruler Pakal (AD 615-683) and his heir Chan B’ahlum. Carved wall panels, bas-reliefs, masks and memorial tablets have provided archaeologists with a wealth of information about their deeds, the city’s history and the Maya universe.

In 1952, archaeologists working at the site announced a major discovery, the tomb of Pakal deep in the heart of the Temple of Inscriptions. The carved lid of the sarcophagus can still be viewed today in the burial chamber. In 1994, another amazing find made the headlines, the tomb of a woman with a burial mask and a hoard of jade covered in cinnabar dust in Temple XIII, next to the Temple of Inscriptions. The Red Queen as she is known is thought to be Tz’ak-b’u Ajaw, the wife of Pakal.

Jungle paths take visitors through the archaeological site and the trees echo with the cries of howler monkeys and the squawks of parrots.

Flights are available to Palenque and to Villahermosa from Cancun. The nearby village of Palenque is a good base for exploring the area and sites of interest such as Agua Azul and Misol Ha waterfalls and the archaeological sites of Yaxchilan and Bonampak in the Lacandon Jungle.

Spring Wellness at the Spa
Scroll to top