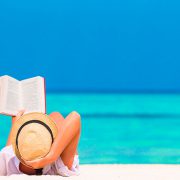 Here is our beach book recommendation for March. Why not write to us and let us know what’s on your bookshelf or Kindle right now?

The Mermaid of Black Conch by Monique Roffey
The Costa Book of the Year 2020 is a tale woven from Caribbean legend and lore by Trinidadian author Monique Roffey.

Centuries ago, a beautiful maiden called Aycayia was cursed by women of her tribe jealous of her beauty and fearful that she would bewitch their husbands. The spell they cast transformed her into a mermaid and she was doomed to swim the Caribbean alone through the ages until she hears a young fisherman called David singing to himself as he waited for a catch off the coast of the island called Black Cove. The year is 1976.

She appears before him several times and he blames himself when she gets too close to another fishing boat and is caught and reeled in by two American fishermen, father and son. The father is determined to sell her to a museum and she is strung up like a billfish and left to die.

In the dead of night David decides to rescue her. She is too badly wounded to release back into the ocean so he hides her. Over time, an extraordinary change takes place as she becomes a woman again.

This is a haunting love story set against a backdrop of island life, of families, friendship, reunions and of loss. Aycayia, David and local landowner Miss Arcadia Rain tell their stories and the narrative is compelling.

If you run out of books there is a bookstore right on the main square in Puerto Morelos. Alma Libre stocks new and secondhand books and is open daily from 10 a.m. to 5 p.m.

Preparing for your flight home: use Mexico Vuela Seguro App to do your health...

The Travel Gallery
Scroll to top