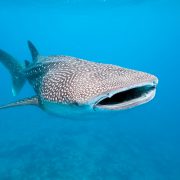 If you are staying at Grand Residences this month and are looking for a once-in-a-lifetime experience, how about swimming with the whale sharks, the gentle giants that are the world’s largest living fish? Get ready for a magical wildlife encounter that’s straight out of National Geographic.

Ocean wanderers in search of food during the year
Whale sharks are great ocean wanderers, migrating thousands of miles through the tropics in search of the plankton and fish eggs that are their staple diet. From mid-May to mid-September, hundreds of them gather in the northern waters of the Mexican Caribbean near the islands of Holbox, Contoy and Isla Mujeres to feed. Biologists say it is the largest whale shark gathering in the world.

Domino fish
Also known as domino fish due to the distinctive stripes and dappled markings on their blue-grey skins, each whale shark has its own unique pattern and taking photos of them is helping experts around the world to compile a catalog. Through the use of this international database for identification purposes and by tagging sharks they have been able to map the movements of some of these enigmatic and endangered creatures during the year.

Whale shark tours
Imagine snorkeling alongside a whale shark and watching as a creature the size of a bus approaches you and then swims placidly by, its gaping jaws open to scoop up the plankton. It is an awe-inspiring sight and one that wildlife watchers won’t want to miss. Guided small group eco trips to see the whale sharks are available and during the day you may be lucky enough to see wild dolphins, sea turtles and the graceful manta rays that also gather in the whale shark feeding grounds.

Ask your Concierge to help arrange a whale shark watching trip for you. You have two options: taking an eco trip from Cancun or Isla Mujeres or traveling to the island of Holbox. Just off the north coast of Quintana Roo, even the wooden signs and colorful murals lining the sandy streets of Holbox show the famous pez domino, as the whale shark is affectionately called by local fishermen.

Staying on Holbox will let you discover the rustic laidback ambiance of the island, spend time on the beach, set sail in search of whale sharks and explore the Yalahau Lagoon, a prime spot for bird watching.