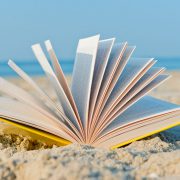 Here are some of the books we are reading right now if you are looking for something for the beach. Some are recent releases but there are some old favorites too. Why not write to us and let us know what’s on your bookshelf or Kindle right now?

Small Island
Andrea Levy, 2004
Following the fortunes of four people in 1948 Britain, this award-winning book is beautifully written and full of warmth. At times moving, funny, thoughtful and disturbing, it casts light on the struggles that Caribbean migrants faced in the land they had been taught to look upon as the Mother Country.
Alone in a London house, Queenie Bligh is taking in Jamaican lodgers for a living because her husband Bernard has not returned from the war in the Far East. One of her tenants is Gilbert Joseph, who joined the RAF to fight against Hitler but finds a very different, much colder, reception when he returns to Britain after the war.
His wife Hortense dreams of being a teacher and living in a fine house but soon discovers that the college qualifications she is so proud of will not be accepted by the Department of Education and that she must go back to university if she wishes to pursue a teaching career.
London is grey, cold and in ruins, a far cry from the warmth, sunshine and tropical colors of Jamaica. Gilbert and Hortense encounter prejudice and suspicion yet they persevere as they make their new life. What was a marriage of convenience becomes a marriage of love and their destinies are intertwined with Queenie’s when her troubled husband returns after years of absence.

Hamnet
Maggie O’Farrell, 2020
A tale set in Stratford upon Avon about young William Shakespeare and his love for Agnes (Anne Hathaway), a country girl wise in herbal lore. They begin married life in the house belonging to William’s father John and have three children: Susana and twins Hamnet and Judith.
Despite their love for one another, Will is restless and decides to seek a new life for the family in London, far from the insults of his father. He falls under the spell of the playhouse and his letters are full of his writing and the troupe of wandering actors he is part of. His visits to Stratford become few and far between as he finds success in London.
The sudden illness of his son brings him back to Stratford but he arrives too late. The family all grieve for Hamnet in different ways and for William it inspired his finest play, Hamlet.
Maggie O’ Farrell’s vision of Stratford, the mysterious Forest of Arden and of the Shakespeare family makes for compelling reading.

The House between the Tides
Sarah Maine, 2018
Art gallery owner Hetty Devereaux inherits Muirian, the ancestral family home on an island in the Outer Hebrides off the coast of Scotland. She leaves her London life to explore the crumbling property that once belonged to an eccentric painter and distant relative called Theo Blake. With the discovery of human bones in the house, she stumbles across an old crime, a history of land disputes and a mysterious disappearance.
Hetty’s story is interwoven with the story of Beatrice, Theo’s young wife, who first visited the island in 1910. As she looks at Theo Blake’s evocative paintings of dramatic landscapes, birds and a wild young girl, Hetty begins to piece together a story of lost love, misunderstandings and sadness.

Need more books? Alma Libre Bookstore is open!
If you run out of beach books, you’ll be able to stock up at Alma Libre right here in Puerto Morelos. Located on the main square, this iconic bookstore has a good selection of new and second-hand books in English and Spanish. Currently open from 10 a.m. to 3 p.m.