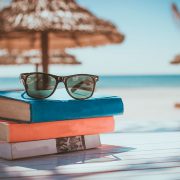 Here are some of the books we are reading right now if you are looking for something to read. Why not write to us and let us know what’s on your bookshelves or Kindle right now?

Brooklyn
Colm Tóibín
Opportunities were so scarce in 1950s Ireland that many young men and women chose to emigrate. This was the case for Eilis Lacey who, with the help of her elder sister Rose and a priest called Father Flood, left her home and family for a new life in New York and a job in a department store. Painfully shy and homesick, she gradually makes friends in the busy boarding house presided over by Mrs. Kehoe and begins to take evening classes in bookkeeping.
Eilis meets Tony at a parish dance and as they see more of each other, they fall in love. She meets his large Italian family and they are busy making plans for their future together when she receives devastating news from home.
Her family needs her so she returns to Ireland. Torn between the land of her youth and an old friend and her new life in America with Tony, Eilis must choose.
A moving story of love, friendship and family ties, set against two very different landscapes: rural Ireland and the bustle and optimism of Brooklyn.

A Moveable Feast
Ernest Hemingway
We have been rereading some old favorites this month, including Ernest Hemingway’s memoir of Paris in the 1920s. As an impoverished writer eking a living from short stories he wrote in the city’s bars and cafes, he met F. Scott and Zelda Fitzgerald, Gertrude Stein, Ford Madox Ford, Ezra Pound and James Joyce, among others.
His evocative account of Parisian life and people and his travels through France make one want to return to the city of light.

A Long Petal of the Sea
Isabel Allende
This is another compelling work of historical fiction by master storyteller Isabel Allende.
Victor Dalmau, is a young doctor caught up in the Spanish Civil War who is forced to flee Barcelona and go into exile in 1939. Vowing to protect his recently widowed sister-in-law Roser he crosses the Pyrenees into France, where he is reunited with her in a refugee camp. The suffering of the Spaniards prompted poet Pablo Neruda to charter a boat to bring 2,000 refugees to Chile, the “long petal of the sea and wine and snow.” Victor and Roser make the voyage to a new life in South America.
Their story spans decades and continents and four generations of their family in Chile. Uprooted by conflict in their homeland, they also witness the rise and fall of Pinochet.
Isabel Allende’s grandfather was one of the Chileans who welcomed the Spanish immigrants and she heard their stories in her childhood. She actually met one of them, Victor, when they were both exiled in Venezuela during Pinochet’s rule of terror. He told her about his 34 years in Chile and his relationship with Neruda and President Salvador Allende.