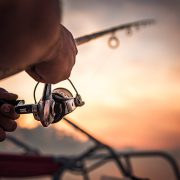 March heralds the start of the sport fishing season in the Mexican Caribbean and avid fishermen are preparing to set sail in search of adventure.

Marlin and sailfish move through area waters following huge shoals of migrating sardines, anchovies and mackerel. Snapper, dorado, bonito and wahoo are also plentiful and even first-time fishermen are sure to catch a barracuda. Knowledgeable local fishermen will take you right to where the fish are running.

Puerto Morelos is one of the most popular spots in the Mexican Caribbean for sport fishing, just a short boat ride away from the rich fishing grounds along the deep ocean trench between the Riviera Maya coast and the island of Cozumel known as the Cozumel Channel.

Other good fishing grounds in the area lie to the east of Isla Mujeres, along the sea mount known as Arrowsmith Bank, around Contoy and Holbox islands and further south along the Costa Maya and accessible from the fishing villages of Mahahual and Xcalak.

The still, shallow lagoons along the Quintana Roo coast offer a different challenge – they are rich in bonefish such as tarpon, permit and snook and attract fly fishermen from all over the world. There are fishing lodges in the Sian Ka’an Biosphere Reserve and Holbox and the Isla Blanca wetlands north of Cancun are also good spots.

Local marinas adhere to the catch and release policy to help conserve fish stocks and we urge you to join their campaign. The thrill of being out on the waves in pursuit of marlin and sailfish, the fastest fish in the sea, should be enough and we hope that you will liberate any game fish you catch.

If you enjoy fishing and are planning a day out on the high seas or want to go bone fishing, the Concierge will help you organize fishing trips and boat charters.