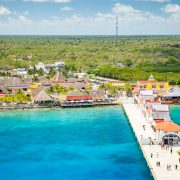 On your next trip over to the island of Cozumel be sure to visit the Island Museum in San Miguel, which has reopened after a lengthy renovation.

There are 11 rooms with exhibits on the island’s ecosystems, coral reefs and endemic species of birds and animals and its history.

The island was inhabited from about 200 BC, although several jade objects have been found that are 3,000 years old and point to trade with the Olmec civilization*, changing the early history of the island.

There are displays telling the story of Cozumel or Cuzamil, which means place of swallows, in the days of the ancient Maya when it was the site of the shrine of Ixchel, the goddess of fertility, childbirth and the Moon and was visited by pilgrims from all over the Yucatan Peninsula. In addition to its religious significance, it was also an important port on the Caribbean maritime trade route.

The coming of the Spaniards and Hernan Cortes in 1519 is another chapter in island history shown in the exhibits, as are the exploits of the pirates who used it as a refuge after raids on ships in the Caribbean.

Refugees fleeing the Caste War settled the island in 1852. Photos and historical documents relating to traditions such as chicle harvesting, Santa Cruz, Cedral Fair and Carnival are also on display.