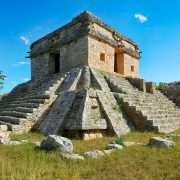 Island Time Music Fest 2020, February 5 -8
It is the eleventh anniversary of this Isla Mujeres music festival featuring Nashville country, rock and R&B performers all in a good cause, raising money to help an island school The Little Yellow Schoolhouse and local special needs children.

Cozumel Carnival, February 19 – 26
More than 146 years of tradition come to the fore in February as islanders celebrate the Cozumel Carnival.
It is also Carnival time in Cancun, Merida, Isla Mujeres and Campeche. Dates may vary slightly.

Equinox, Chichen Itza & Dzibilchaltun, March 19-21
The famous light and shadow serpent of Kukulcan appears on El Castillo Pyramid at Chichen Itza and descends from the heavens at sunset on the day of the Spring Equinox (March 19-21). It is also visible the day before and after, cloud cover permitting.
Elsewhere in the Yucatan, at dawn on the day of the Equinox the rising sun appears through the doorway of the Temple of the Dolls in the ancient city of Dzibilchaltun to the north of Merida.
The spring equinox officially falls on March 19 in 2020 but the largest gathering at Chichen Itza takes place on March 21, a national holiday in Mexico.

50th anniversary of Cancun, April 20
Cancun is gearing up to celebrate its 50th birthday on April 20 and City Hall is planning a series of events – including sporting events and music festivals – over the next few months. More details coming soon.

Travesía Sagrada Maya, Xcaret and Cozumel, May
The Sacred Mayan Crossing is the reenactment of an ancient pilgrimage. Oarsmen set sail from the port of Pole (now Xcaret) in wooden canoes bound for the island of Cozumel where they will worship at the shrine of Ixchel, the Maya goddess of the moon and fertility.

Running for a cause, 2020 Royal Resorts Foundation Race, April 25
Scroll to top