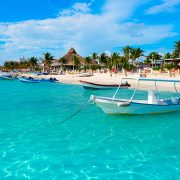 On January 6, the municipal district of Puerto Morelos celebrated its fourth anniversary. Although the story of this fishing town actually began 105 years ago when it exported chicle and tropical hardwoods, it only became an independent community in 2016. Home to 30,000 people, it welcomed one million visitors in 2019.

A family day out
Scroll to top