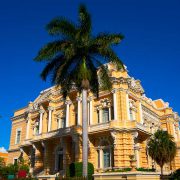 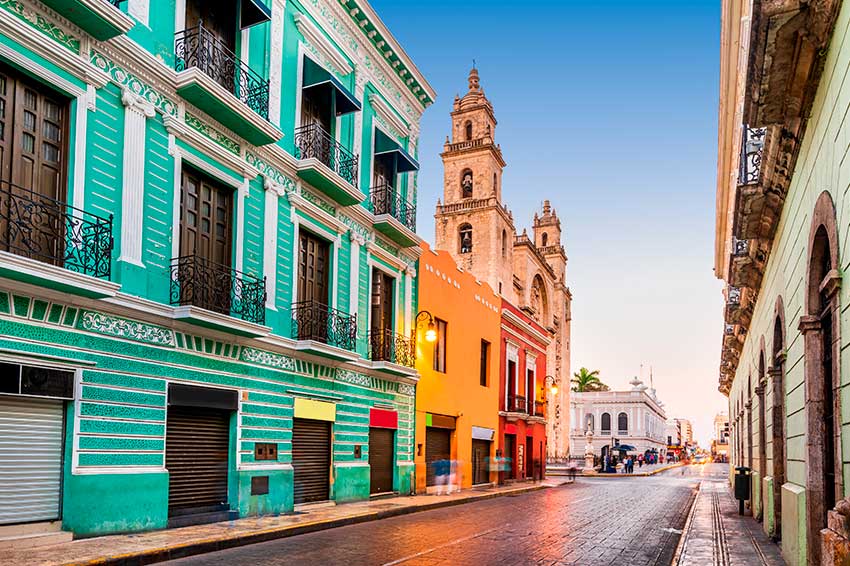 Plan a day or two-day trip to one of the Yucatan’s colonial towns or cities for a glimpse of history and rich traditions.

Heading the list is Merida, state capital of the Yucatan. Steeped in history, Merida was founded in 1542 by the Spanish conquistadors amidst the ruins of a much earlier Mayan city called T’ho.
Delve into the past, exploring the colonial city center, its churches and former convents, squares and elegant mansions. You’ll soon discover that there is much to see and do in Merida in addition to history tours: museums and galleries, bustling markets and craft shops, a tempting dining scene and a different cultural event somewhere in the city every night.
Start your Merida tour in the main square, which is dominated by the 16th-century Cathedral, Casa de Montejo, the home of the founding father Francisco de Montejo and now a museum, City Hall and Government House. Then walk along the surrounding streets. The colonial barrios or neighborhoods clustered around the main square constitute the second largest historic city center in Mexico.
Stroll along Calle 60, which will take you through leafy squares past more colonial churches, the University of the Yucatan, one of the oldest in the Americas, and the belle époque Peon Contreras Theater. Heading north along Calle 60, you’ll eventually make your way to Paseo Montejo, Merida’s famous boulevard. Inspired by the Champs Elysees, it is lined with mansions built at the height of the henequen boom in the late 19th and early 20th century. 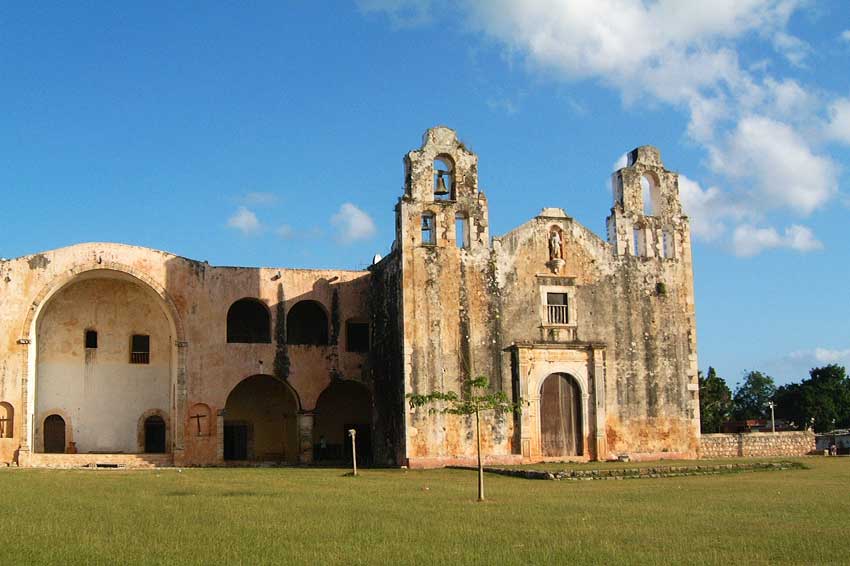 South of Merida, the Ruta de Conventos or Convent Route is a chain of traditional Mayan villages each one with its own colonial church of monastery to visit. They include Acanceh, Teabo, Mani and Oxtankah. Many visitors combine this circuit with a visit to the ancient Mayan city of Uxmal and other archaeological sites along the Puuc Route. You can also visit haciendas and explore Loltun Caves, 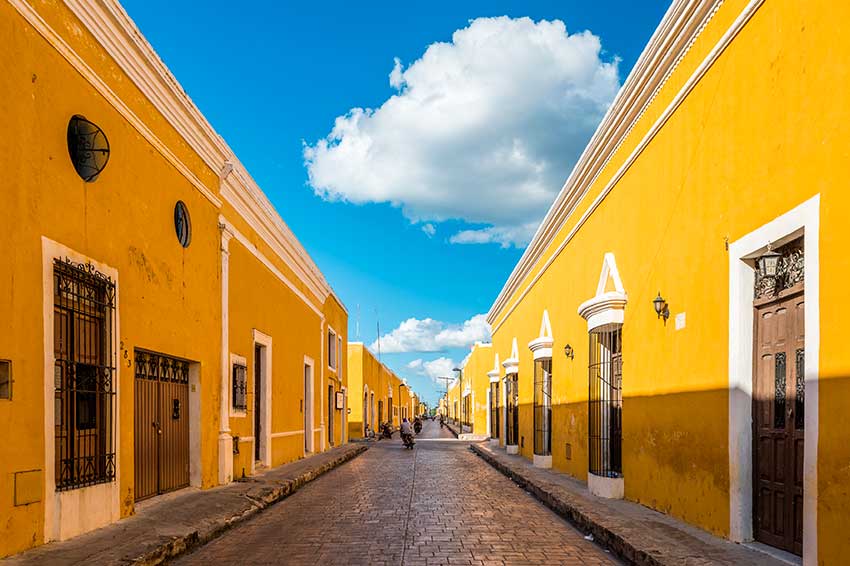 Twin towns of tradition in the east: Izamal and Valladolid

Leaving Merida behind and heading east are the smaller colonial towns of Valladolid and Izamal. Both are classed as Pueblos Magicos (Magical Towns) by the Mexican Tourism Board and have 16th-century churches, sprawling former monasteries or conventos and restored mansions to captivate visitors.
Famous for its huge 16th-century Franciscan convent, Izamal is often called the “city of three cultures,” a reference to its pre-Hispanic and Spanish heritage and the traditions of today’s Mayan inhabitants.
Inhabited by the ancient Maya as far back as the 3rd century B.C., Izamal became a sacred site with shrines to two deities: Itzamná (the chief god, inventor of writing, medicine and agriculture) and Kinich Kakmo (the sun god). Archaeologists have unearthed more than 20 major Mayan buildings around town. The principal temple is the pyramid of Kinich Kakmo, the third largest building in Mesoamerica in terms of volume.
After the Spanish Conquest, Franciscan friars took advantage of Izamal’s religious importance by building a huge mission on top of the Pap-Hol-Chac temple. The Convento de San Antonio de Padua was founded in 1549 and completed in 1618. Home to the Virgin of the Immaculate Conception, the patron saint of the Yucatán since 1648, it is one of Mexico’s most important shrines.
The convent and the surrounding historic houses, arches, churches and civic buildings are painted yellow and are part of the charm of this Pueblo Mágico. Explore its tranquil neighborhoods, sample the traditional cuisine, watch artisans at work and call in at the Community Museum in the main square. 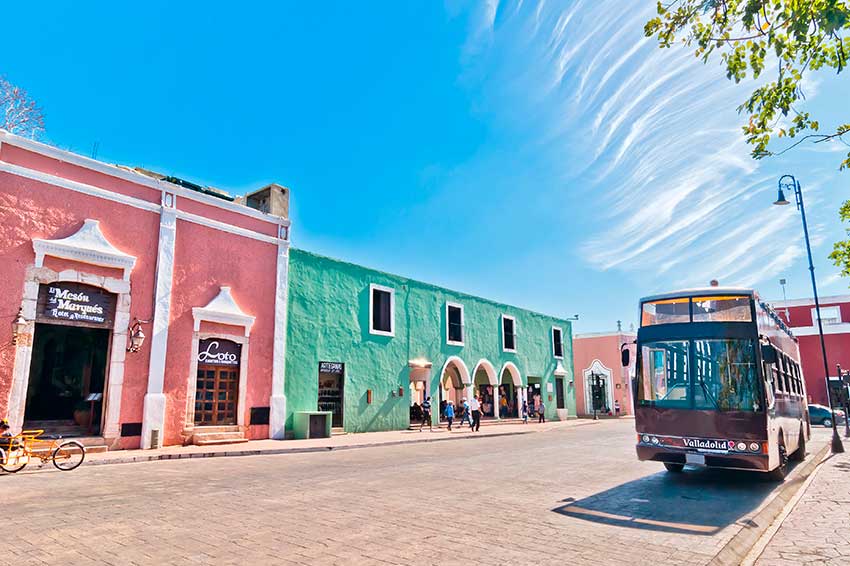 Known as the “Sultana of the East,” Valladolid is an interesting spot to spend the morning or afternoon exploring and shopping for crafts or to stop for lunch or dinner after a trip to Chichen Itza.
Stroll through the tree-lined main square where the 17th-century San Servacio Church and the Town Hall are located. Behind the Town Hall, the San Roque Museum has exhibits on the different periods of Valladolid history. You can also visit the Mexican Ethnic Clothing Museum (MUREM) on Calle 41.
Just a half block from the main square is Casa de Los Venados, a restored colonial mansion that is a private home with a collection of more than 3,000 pieces of Mexican folk art. There is a guided tour of the property at 10 a.m. and visitors are asked to make a donation in support of local charitable causes.
Next stop is Calzada de Los Frailes, a street lined with restored colonial houses that takes you as far as the sprawling San Bernardino Church and Sisal Convent. En route be sure to call in at La Casona to see the shrine to La Candelaria, the patron saint of Valladolid, a mosaic made from fragments of Talavera pottery.
There are more colonial churches in the town’s barrios or neighborhoods and you should also visit the Zaci Cenote, a huge sinkhole with cliffs covered with ferns, vines and tree roots. Bats, swifts, martins and other birds make their nests in the limestone and swoop low over the clear turquoise water
Before you leave Valladolid, call in at the Mayapan Distillery where the blue agave plant is harvested, cooked, crushed and the sugary sap distilled using traditional artisanal techniques to make a tequila-like spirit.

Your Concierge will help you arrange a trip to Merida, Valladolid, Izamal and to southern Yucatan.