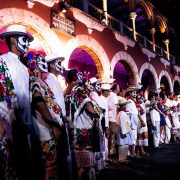 A series of events featuring music, dance, art, film and cuisine in Cancun during October. Artober will culminate with representation of Day of the Dead traditions.

The 2019 sea turtle nesting season draws to a close with this annual festival held in Xcacel, Akumal and Tulum.

This Festival celebrates Hanal Pixan, the Mayan Dia de Muertos traditions with altar exhibits in the main square, photography exhibitions, conferences, music, dances, the Pib Food Festival and the Paseo de las Animas (Procession of Souls) from the City cemetery through the streets to San Juan Park on October 31.

The year-long Toh Bird Festival draws to a close with the Bird watching marathon in the Valladolid area. Teams see who can clock up the most bird species sightings over two days in this fun event.