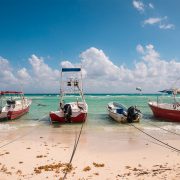 A celebration of the world’s largest fish and summer visitor to the Mexican Caribbean.

165th Anniversary of the Foundation of Holbox, Holbox, July 22

Located 15 minutes to the north of Merida, the village of Dzitya has been hosting a craft festival for 15 years now. Local wood and stone carvers exhibit their art, in addition to other Yucatecan crafts such as hammocks, embroidered textiles, ceramics, palm and henequen products. This year, folk artists from five guest states: Puebla, Veracruz, Michoacán, Querétaro and Guanajuato will join them.

There will also be stalls selling honey, candies, drinks and traditional cuisine from the Yucatan and the guest states.

A procession of boats to honor the statue of the Virgin.

Ten days of masses, processions, traditional dances and music in Izamal, a historic town in the Yucatan famous for its colonial convent and surrounding buildings all painted in bright yellow with a white trim. Izamal shares the distinction of being one of the Yucatan’s twin Pueblos Magicos or “Magical” Towns with Valladolid, a name given to smaller Mexican communities that are rich in history and traditions or are the site of natural wonders.

169th Anniversary of the Settlement of Isla Mujeres, August 17

Isla Mujeres celebrates its anniversary in August, 169 years since the first settlers in the modern era founded the village of Dolores. Isla Fest events include processions, dance performances, live music and more.

A procession of local guilds carries the statue of Christ from the parish church of Sitilpech through the streets of Izamal to the sanctuary where it will remain for 27 days before being returned to the church. This traditional fiesta is celebrated with processions, masses, fireworks and a vaqueria.

Hosted by Xcaret Park, the Festival of Life and Death Traditions showcases one of Mexico’s richest and most colorful customs, the Day of the Dead or Día de Muertos, which takes place on November 1 and 2.

A week of fine dining at Grand Residences