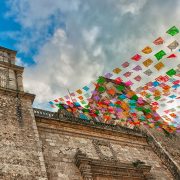 165th Anniversary of the Foundation of Holbox, Holbox, July 22

A procession of boats to honor the statue of the Virgin.

169th Anniversary of the Settlement of Isla Mujeres, August 17

Isla Mujeres celebrates its anniversary in August, 169 years since the first settlers in the modern era founded the village of Dolores. Isla Fest events include processions, dance performances, live music and more.

Hosted by Xcaret Park, the Festival of Life and Death Traditions showcases one of Mexico’s richest and most colorful customs, the Day of the Dead or Día de Muertos, which takes place on November 1 and 2.

Pampering after your morning workout