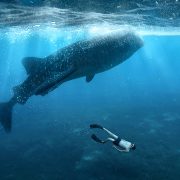 A huge shadow on the water, dappled blue-grey skin and the flick of an immense tail, the whale sharks are here. In May the gentle giants of the sea make their way to the Mexican Caribbean. Reports start to come in from yachtsmen who spot them and whale shark watchers prepare for their own amazing natural encounter with the largest fish in the sea.

What draws whale sharks here? The answer is food. Whale sharks migrate thousands of miles through the oceans, moving between feeding grounds during the year. From mid-May to mid-September they gather in large numbers in the Mexican Caribbean to feed on the plankton that blooms in the sizzling summer temperatures. Marine biologists working in the area have also discovered that they are partial to the eggs of a fish called the bonito or little tunny.

The whale shark feeding grounds lie to the east of Contoy and Isla Mujeres and in the Gulf of Mexico near Holbox and Cabo Catoche and are part of a marine biosphere reserve. There may be hundreds of whale sharks skimming the ocean surface to filter feed on the plankton in what scientists believe is the largest gathering in the world.

The sight of a whale shark as it placidly swims by your boat is an incredible experience but it gets even better. Accompanied by an expert guide you can also swim alongside them as they feed, an emotional once-in-a-lifetime experience.

On the boat journey out to the whale shark area, there’s the added thrill of spotting wild dolphins and sea turtles. Huge manta rays also gather to eat plankton alongside the whale sharks and sometimes breach the water surface in spectacular flight.

Guided small group eco trips to the whale shark feeding grounds are available during the summer, starting in June. Ask your Concierge to help you book this incredible ocean-going adventure and remember to wear a rashguard, sunblock is not allowed for the protection of the animals and the sea.