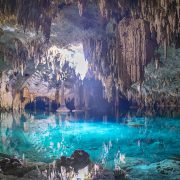 Have you ever gazed into the mysterious blue depths of a jungle cenote or sinkhole and plunged into the crystal-clear waters to escape the midday heat? If you haven’t, then why not go exploring on your next vacation? The limestone landscape of the Yucatan Peninsula is peppered with caves and natural wells in the forest called cenotes, which are gateways to a hidden world, a labyrinth of underground rivers. The ancient Maya venerated them as sacred places and they still have an air of mystery.

Join us on a journey to some of the Riviera Maya’s most beautiful caves and cenotes.

For starters, what is a cenote?

The Yucatan Peninsula is a vast limestone shelf with no surface rivers. Rainwater seeps through fissures and fault lines in the rock and accumulates in aquifers and underground rivers, which are the only source of fresh water in the area.

The word “cenote” comes from the Mayan word d’zonot or ts’ono’ot which means “flooded cave,” “abyss” or “depths.” These sinkholes or natural wells are formed as rainwater reacts with the porous limestone to form carbonic acid, which dissolves, erodes and weakens the rock. Over millions of years, the fissures are enlarged and tunnels and caves are formed. Erosion is twofold, from rainwater on the surface and the underground rivers flowing through the rock. Eventually the rock becomes so unstable that huge slabs carve off and cave roofs collapse, leading to the creation of sinkholes.

Cenotes can be deep lakes or shallow pools and they may suddenly appear as a result of subsidence and a rock fall in a cave. There are several different types of sinkholes: open cenotes are those in which the ancient cave roof has collapsed completely. Partially open cenotes still have a section of the cave roof and there are still others that have a small opening in the roof through which sunlight and the roots of jungle trees filter in. 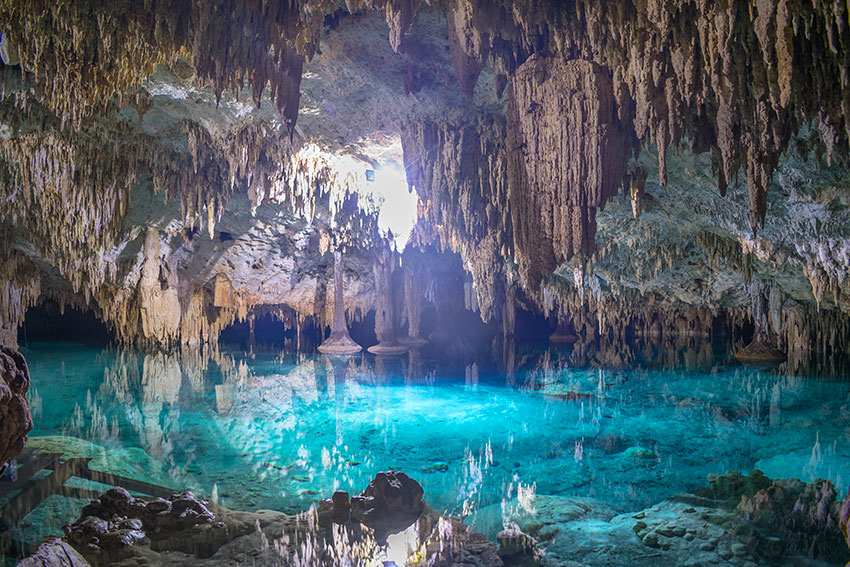 Sacred wells, gateway to the home of ancient gods

The number of these enigmatic wells scattered through the peninsula is unknown, in the state of Yucatan alone there are between 7,000 and 8,000 cenotes, many of which are associated with local legends. The Maya believed that cenotes were sacred places – they were the home of the rain god, Chaac, and the gateway to Xibalba, the Underworld. Even today, some communities believe that the aluxes or spirits haunt caves and cenotes and others tell of mythical creatures such as golden crocodiles.

Visiting cenotes is an unforgettable experience. Their cool, crystal-clear waters are inviting and quite a surprise after the steamy midday heat and as you swim or snorkel, look down into the depths and marvel at Mother Nature. You’ll see pillars and sculpted columns that look like the turrets and spires of a submerged city and in the distance the black holes of caves and tunnels leading into the unknown.

You’ll also catch a glimpse of some of the jungle creatures found around cenotes. Swallows, martins and butterflies dip for water; turquoise-browed motmots make their nests in the limestone rock and coatimundis, agoutis, spider monkeys and even deer may make an appearance.

Here’s a guide to some of the Riviera Maya’s most beautiful cenotes.

Follow the Ruta de los Cenotes, the highway west from Puerto Morelos that leads through the jungle, bound for the village of Leona Vicario.

Wooden signs beside the road indicate turn offs for jungle trails leading to cenotes open to the public such as Las Mojarras where you can zip line, dive in from a tower or just enjoy the view.

The seven mouths that give the Siete Bocas cenote its name glow gently as the sunlight penetrates the turquoise depths. The strange rock formations in this cenote are incredible.

Next stop along the Ruta de los Cenotes is the mysterious pool of Boca de Puma. Located in a private jungle reserve, this cenote offers a variety of adventures ranging from snorkeling and zip lining to rock climbing, rappelling down a cliff wall and biking. There is also a chiclero camp where you can learn how the sap of the chicozapote tree was harvested in the area and used to make chewing gum.

A winding trail leads to Verde Lucero, an open cenote in a forest clearing where another rustic zip line provides hours of fun. 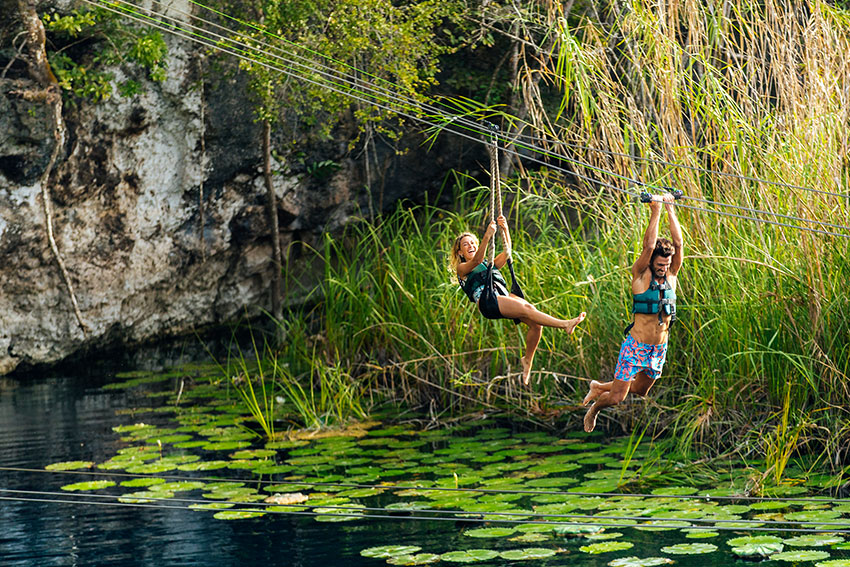 The Xenotes Oasis Maya trip gives you the chance to explore four very different cenotes in one day, trying your hand at snorkeling, zip lining and kayak. The four cenotes are named in Maya after the four elements: K’áak or Fire, Há or Water, Lik’ or Wind and Lu’um or Earth. All are filled with crystal-clear water and strange rock formations, and each has its own charm.

Expert guides point out native flora and fauna as they escort you along jungle trails, explaining how cenotes are formed and their importance as sacred sites for the ancient Maya. They will also tell them about Mayan mythology, including the tale of the Aluxes, the guardian spirits of the forest and the milpa or cornfields.

Xenotes, Oasis Maya is for small groups of visitors and includes the use of snorkeling gear and a life jacket, lunch and transport. 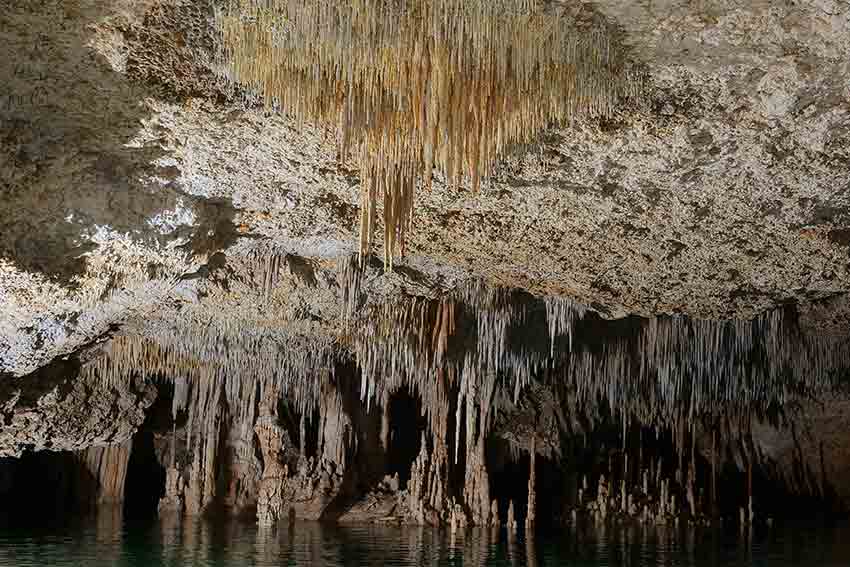 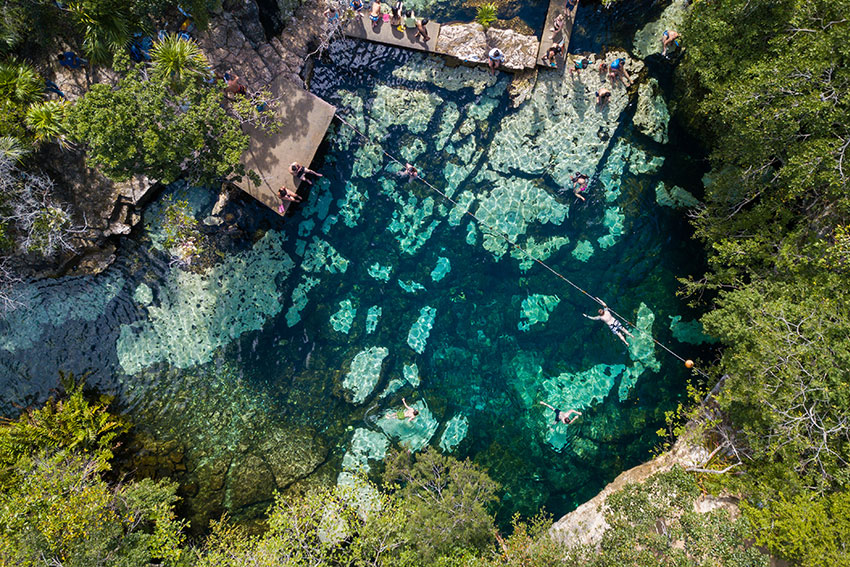 Cenotes in the Puerto Aventuras Area

A cluster of cenotes lies in the forest to the west of Highway 307 between Puerto Aventuras and Akumal. One mile south of Puerto Aventuras is the Kantun Chi eco-park with two caves and four cenotes (Kantun Chi, Sas Ka Leen Ha, Uchil Ha and Zacil Ha).

In a jungle clearing, Cenote Azul is another large cenote with several inlets for snorkeling. The water is so tempting that you may not be able to resist the urge to take a running jump!

Christened by divers, Taj Mahal is one of the most spectacular in the area; shafts of sunlight like an underwater laser show illuminate endless vistas stretching into the distance. Even more poetically named is Jardín del Edén or Garden of Eden, a large cenote rich in marine life and rimmed by exuberant vegetation that is ideal for an afternoon picnic.

Chi kin Ha is another popular shallow cenote in the area. 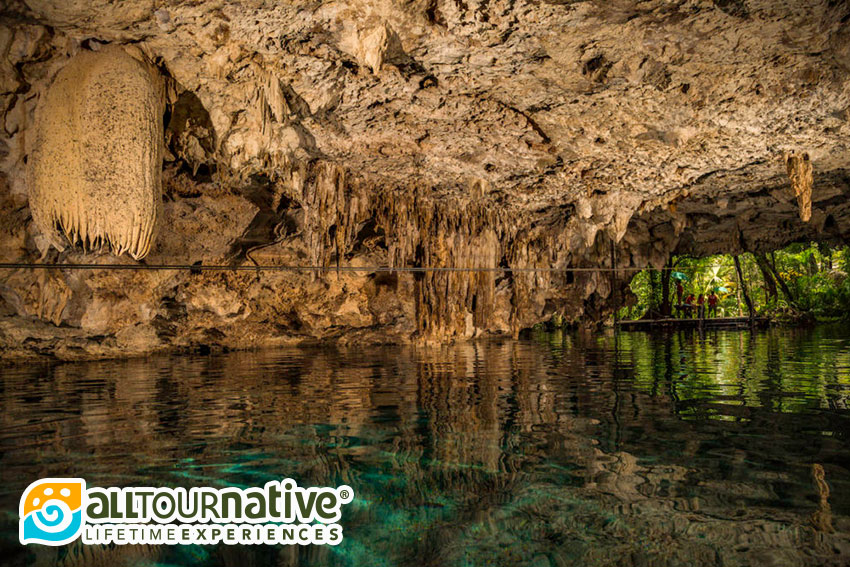 This incredible cenote is the mouth of one of the longest underground river systems in the world.

The Jungla Maya trip offered by Alltournative gives you the opportunity to participate in eight different activities in one day: swimming and snorkeling in Nohoch Nah Chiich and Yaxmuul cenotes, abseiling, zip lining, a 4×4 Unimog ride, biking and walking along forest trails and watching a Mayan priest perform a ritual venerating the ancient gods and nature itself.

Opposite the exit for Xpu-Ha, this jungle park contains the Minotauro Cenote, a semi-open cenote with areas for swimming and snorkeling. There is also a rope bridge course and zip line fun. 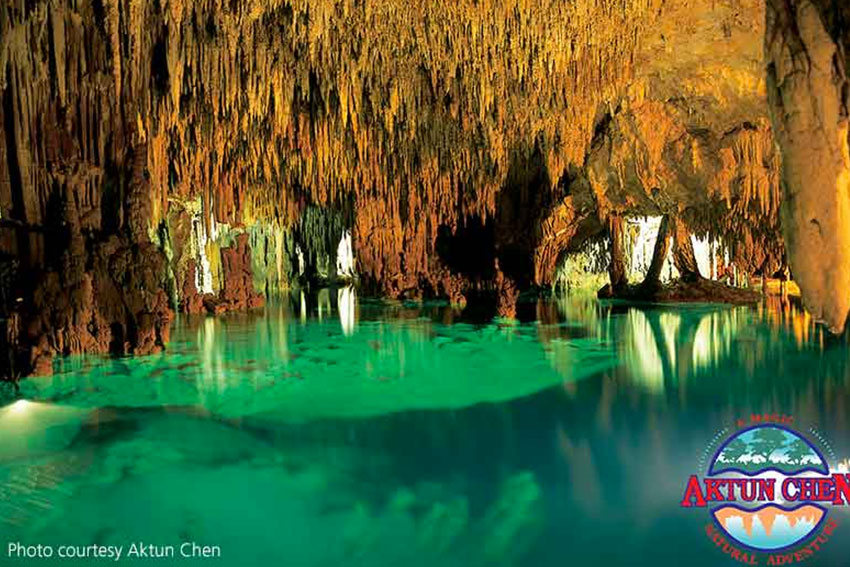 The Aktun Chen cave system lies in the jungle just south of Akumal. There are spotlights in one of the three galleries to show the turquoise waters of the cenote and the delicate beauty of the stalactites, stalagmites and flowstones sculpted by water and calcite over millions of years. 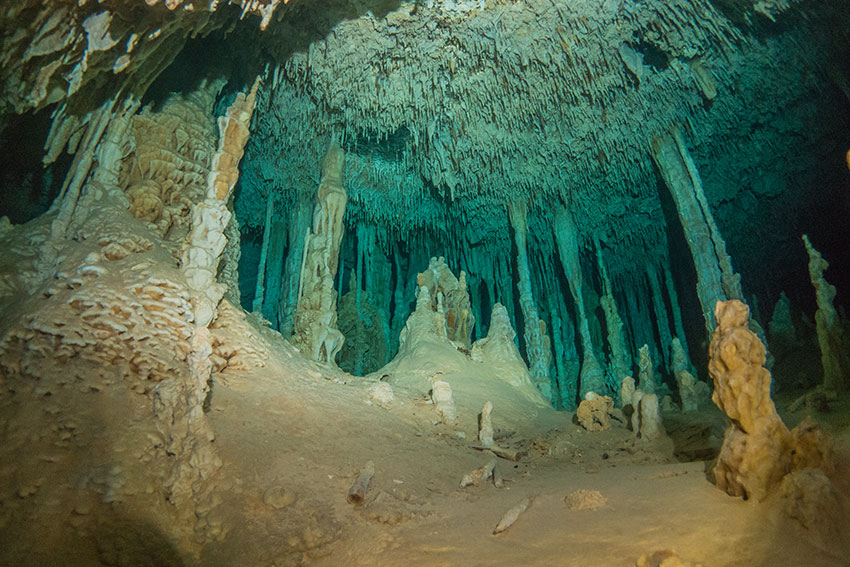 The Tulum area is famous for having the world’s longest underground rivers discovered to date and they are still being explored. Divers and archaeologists have made amazing discoveries of Maya ceramics, fossils of prehistoric species and the bones of the earliest humans to settle the Yucatan Peninsula, 13,000 years ago.

Dos Ojos Cenote park is the site of two of the longest underground rivers in the world and some of the Riviera Maya’s most beautiful cenotes or sinkholes. With a guide you’ll go snorkeling in several cenotes or sinkholes, try zip lining and enjoy a day in the jungle. The park is also the site of a Museum of Prehistory with exhibits of some of the artifacts and bones discovered by archaeologists and cave divers during explorations of area cenotes. 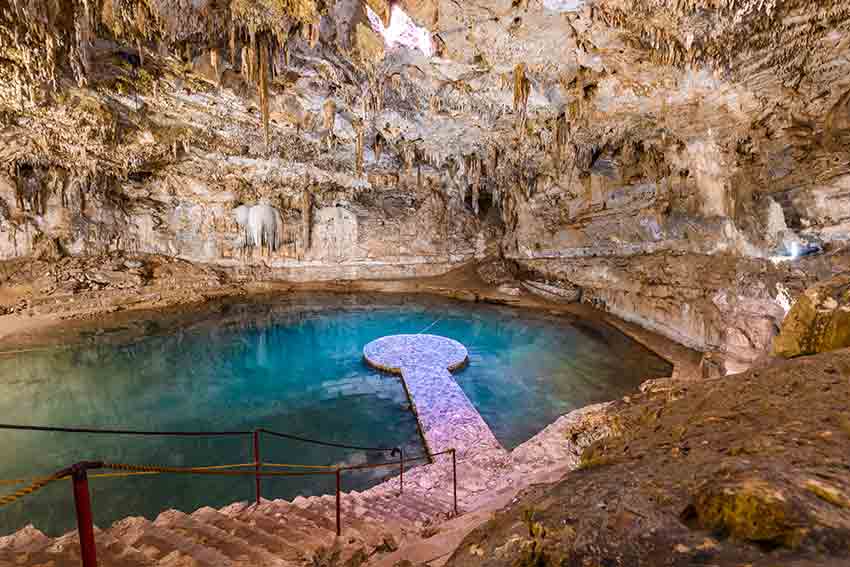 Don’t stop with the Riviera Maya. Follow the cenote trail into Yucatan. There are a number of beautiful cenotes clustered in and around the colonial town of Valladolid such as Zaci, Dzitnup, Samula, Suytun and Hubiku. Ik-Kil is near Chichen Itza and there are more cenotes in the Cuzama and Tecoh areas.

Go caving with a visit to Balancanche near Chichen Itza and Loltun on the Puuc Route in southern Yucatan. Both contain offerings to the gods, evidence of ancient rituals performed by Mayan priests.

In southern Quintana Roo, Cenote Azul on the shores of Bacalar Lagoon is one of the deepest cenotes found to date.

Ask your Concierge for more recommendations and start planning your own cenote trail.

Many cenote parks have life jackets for you to wear when swimming and you must never venture outside the areas where swimming or snorkeling are permitted. Do not swim alone or go into tunnels. Always follow the instructions given by park staff.

If you are an experienced diver, cave diving courses are available if you would like to explore the flooded caves, cenotes and underground rivers of the Riviera Maya accompanied by an expert guide.

New shopping mall to be built north of Puerto Morelos