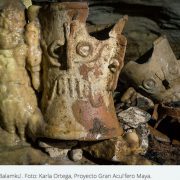 Members of the Gran Acuifero Maya research expedition led by Mexican archaeologist Guillermo de Anda who are exploring the caves, cenotes and underground rivers of the Yucatan Peninsula recently made an amazing discovery in Chichen Itza.

They rediscovered a cave called Balamku (Cave of the Jaguar God in Maya) that was once a shrine used by Mayan priests over 1,000 years ago for rituals to honor the rain god. After crawling through a tunnel and worming their way through the tiniest of spaces, they found seven offerings of pottery, incense burners, grinding stones, jade and shells in chambers and galleries in the depths of the cave.

Located 2.7 kilometers to the east of the Pyramid of Kukulcan, Balamku had been discovered in 1966 by some local farmers and reported to archaeologist Victor Segovia who ordered the cave mouth to be sealed up again for reasons unknown.

Guillermo de Anda and Professor James Brady of California State University stated that the ceramics and other offerings constitute the largest discovery in the Chichen Itza area for decades and will help rewrite the history of Chichen Itza.

Cancun is 49 years old this April
Scroll to top