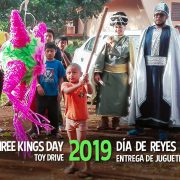 Royal Resorts volunteers joined the Ciudad de la Alegria community center’s Dia de Reyes convoy on January 6 to give a Kings Day surprise of toys, sandals and candy to hundreds of children in Mayan villages in Quintana Roo and Yucatan.

There were two routes and two convoys, one to communities in the Tulum-Coba area and the other following a route through northern Quintana Roo and Yucatan, which called at remote hamlets and villages in the Xcan-Tizimin area, accessible by single lane roads.

The children were greeted by the Three Kings and then lined up to receive toys, sandals and candies from the volunteers. There were piñatas to be broken, more candies to collect and some lucky children even took home bikes they won in a raffle.

Other volunteers distributed clothes and food and there were grocery boxes for elderly residents. One couple had even brought biscuits for the village dogs.

More than 2,900 toys and pairs of sandals were given out during the day. Many of the toys were donated by Royal Resorts members, guests and employees and we thank them for their help in spreading happiness to so many children.

Learn more about the Royal Resorts Foundation and its causes: study scholarships for children, the fight against cancer, physiotherapy for children, employee emergency relief in times of serious illness, support for community programs and conservation.

Joining us in February, how about competing in the Fourth Royal Resorts Foundation...
Scroll to top