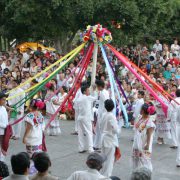 This traditional fair is dedicated to the patron saint of Valladolid, the Virgen de la Candelaria. Events include livestock, craft, jewelry and food exhibitions, processions, concerts and dances.

Dating from 1876, Cozumel Carnival is the oldest Carnival in the Yucatan Peninsula and one of the oldest in Mexico.
Cancun, Playa del Carmen, Isla Mujeres, Merida, Campeche and Valladolid will also be holding their own Carnival celebrations; the dates may vary slightly in each location. The Cancun Carnival will be from March 1 to 5 and in Merida from February 26 to March 6.

It is the tenth anniversary of this Isla Mujeres music festival featuring country, rock and R&B performers.

The famous light and shadow serpent of Kukulcan appears on El Castillo Pyramid at Chichen Itza and descends from the heavens at sunset on the day of the Spring Equinox (March 20-22). It is also visible the day before and after, cloud cover permitting.
Elsewhere in the Yucatan, at dawn on the day of the Equinox the rising sun appears through the doorway of the Temple of the Dolls in the ancient city of Dzibilchaltun to the north of Merida.
The spring equinox officially falls on March 20 in 2019 but the largest gathering at Chichen Itza takes place on March 21, a national holiday in Mexico.