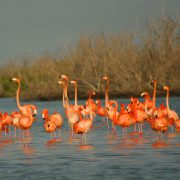 If you are interested in nature, a visit to a biosphere reserve like Sian Ka’an or Rio Lagartos is an amazing eco adventure any time of the year to catch a glimpse of the wildlife that lives in the wetlands and jungles of the Yucatan Peninsula. However, this is even more so in the fall and winter when the area welcomes millions of migrant birds.

Falling autumn temperatures in Canada and the United States are the signal for more than 150 million birds to take to the wing and head south for the warmth of the Yucatan. They follow one of the world’s most important migratory routes for birds. Each winter the area’s coastal lagoons and salt flats and inland jungles welcome an additional 226 species of migratory birds, large and small, from birds of prey to waterfowl, waders and songbirds, a magnet for birdwatchers and nature lovers.

Some birds spend the winter season in the Yucatan or pause to feed and rest on the coast before continuing their journey south. Migrants include arctic terns, ospreys and wood storks. There are widgeon, teal, pintail, scaup and shoveler ducks, hawks and falcons, warblers and colorful seed-eaters like the painted and indigo buntings. The smallest migrant is surely the ruby-throated hummingbird that makes an incredible 30-hour journey across the Gulf of Mexico non-stop!

Birdwatchers and wildlife fans visiting the biosphere reserves of Rio Lagartos, Contoy, Sian Ka’an and Celestun and other good birding spots such as the archaeological sites are guaranteed plenty of winter sightings. 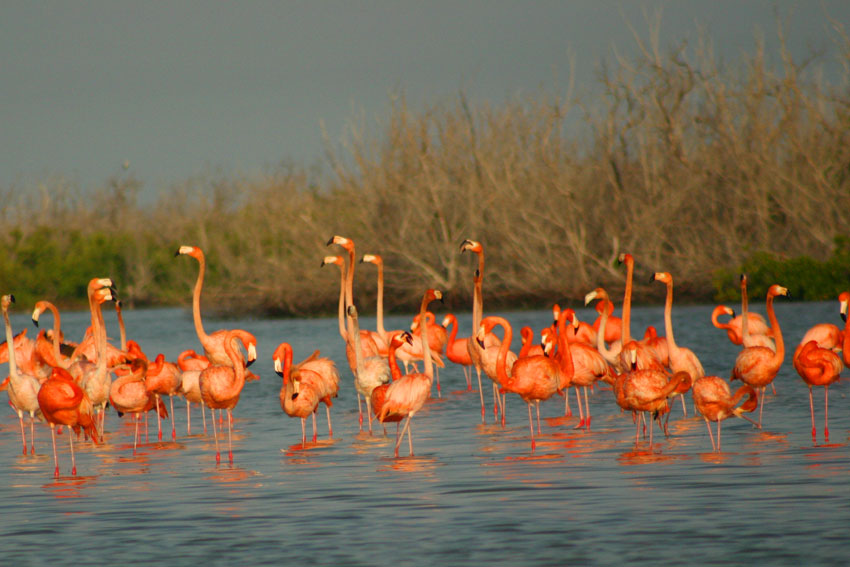 Fishermen from the waterfront village of Río Lagartos offer boat trips along the ria or estuary and through the mangroves to the flamingo feeding grounds. Many of them are trained eco guides and carry checklists to help you identify the birds you see. Keep a lookout for flocks of white pelicans that migrate from as far north as the Arctic Circle, reddish and snowy egrets, roseate spoonbills, skimmers, peregrine falcons and kingfishers. 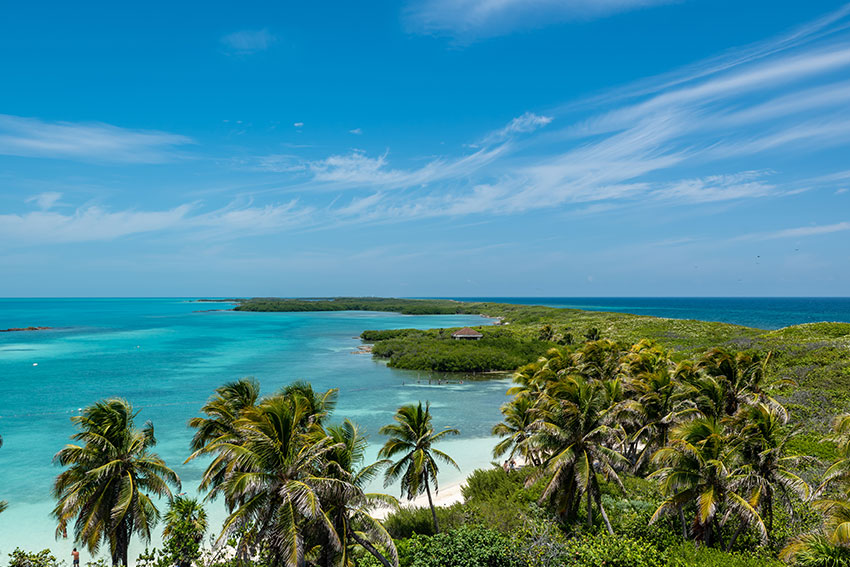 Contoy
A two-hour boat ride to the north of Cancun, the uninhabited island of Contoy is also known as la isla de los pajaros or “the island of the birds.”

A two-hour boat trip to the north of Cancun, Contoy has been a protected area since 1961, and was declared a national park in 1998. The island’s dunes, palm groves and mangrove forest are a refuge for 150 species of native and migrant birds, including one of the largest populations of brown pelicans in the Caribbean, a 5,000-strong colony of frigate birds and 3,000 double crested cormorants. Other residents include ten members of the heron family such as the great blue heron, snowy egret and the yellow-crowned night heron. During the winter months, the island is a refuge for migratory ducks, plovers, sandpipers, oystercatchers and other shore birds. 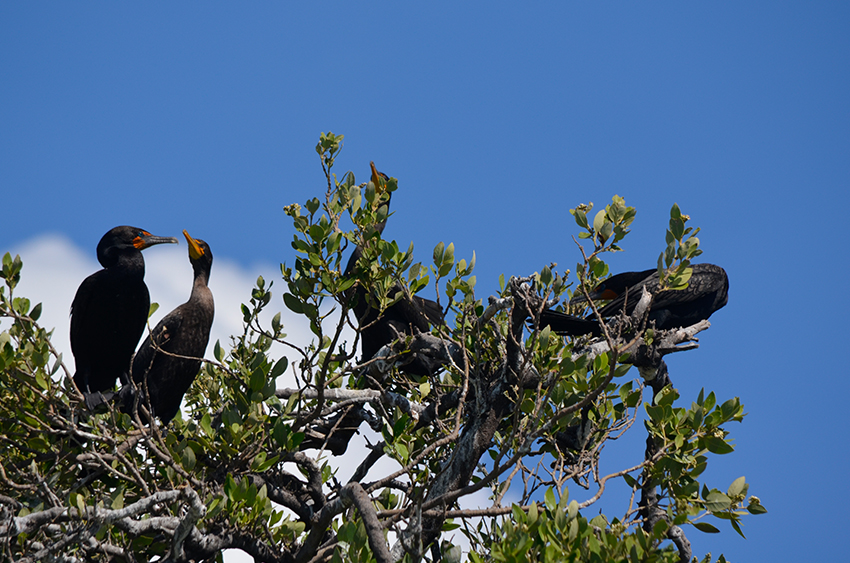 Sian Ka’an is home to over 350 species of bird and you are bound to notch up a respectable tally of sightings during a visit. Sixteen varieties of heron and egret – including the boat-billed, tiger and agami heron – nest in the mangroves, along with ibis, roseate spoonbills, wood storks and frigate birds. Flamingos can also sometimes be spotted feeding in coastal lagoons.

Further inland in at the archaeological site of Muyil, parrots, motmots, laughing falcon, great curassow and ocellated turkey are some of the forest dwellers.

Sian Ka’an also has a large breeding population of ospreys and protects a tiny colony of the rare jabiru stork, the largest bird in the Americas, in the depths of the wetlands. 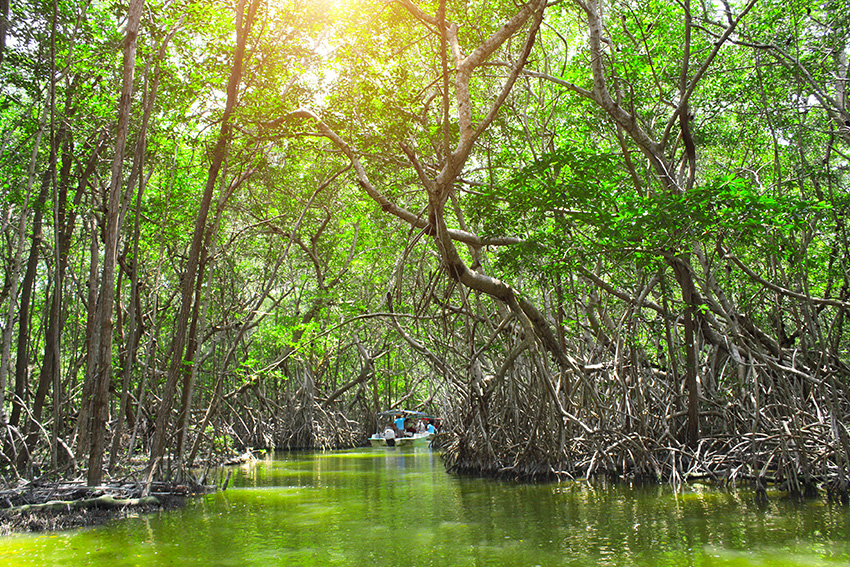 The reserve is rich in wildlife: over 300 species of bird have been recorded, including thousands of flamingos, the elusive boat-billed heron, pygmy kingfisher, sandwich tern and the osprey. Local fishermen offer boat trips along the estuary to see the flamingos feeding, but you’ll see many more species during your voyage through the mangrove forest.

El Palmar reserve borders Celestún to the north and the Los Petenes Biosphere Reserve in Campeche to the south. 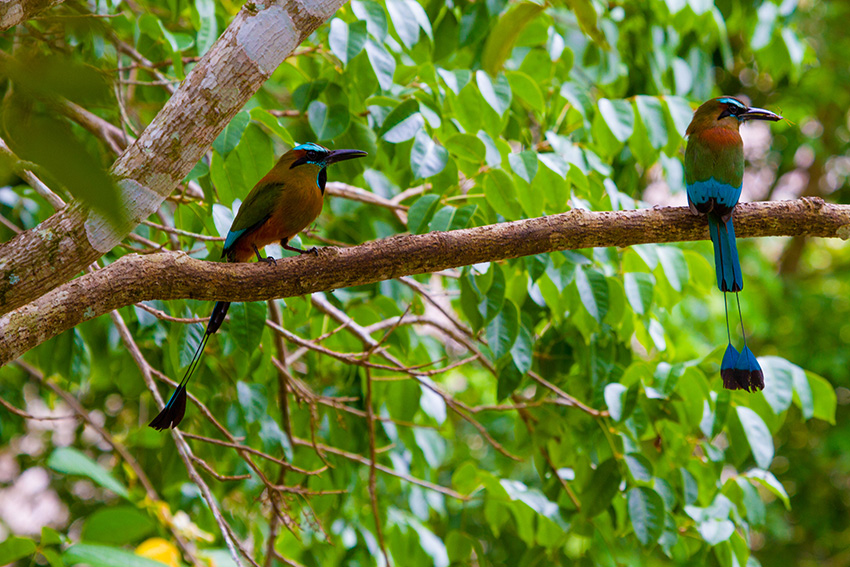 Whether you visit archaeological sites like Chichen Itza or Uxmal or go on a jungle birding tour on the Ruta de los Cenotes, you’ll catch a glimpse of the spirit of the jungle, the Yucatán’s own bird of paradise, the turquoise-browed motmot. Follow its soft whooping call and the flash of russet and blue and you might find its nesting site in the limestone cliff of a cenote or the crumbling wall of an ancient temple. Other jungle dwellers include flocks of parrots, Yucatan and green jays, oropendulas, chacalacas and three species of toucan, the collared aracari, emerald toucanet and the keel-billed toucan.

Book your eco trips
Your Concierge can help you book trips to Sian Ka’an, Rio Lagartos and Contoy, a Puerto Morelos birding trip and other reserves in the area.