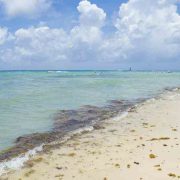 It is natural for seaweed to wash up on the beach from season to season, after storms and in the summer heat. However, this summer large quantities of two species of seaweed known as Gulfweed or Sargassum (Sargassum natans and Sargassum fluitans) are coming ashore from time to time in the Riviera Maya, Cancun and other parts of the Mexican Caribbean. These landings occur periodically, the amount of seaweed varies and not all beaches are affected.

Similar landings are occurring in the Caribbean islands and along the Gulf coast of the United States, including Florida.

Based on the recommendations of marine scientists, the authorities are now implementing a second phase of the program to prevent the sargassum from coming ashore by installing barriers in the sea. The first barrier has already been installed in the Punta Nizuc area and will be followed by additional barriers in Tulum and Playa del Carmen, Mahahual and Puerto Morelos.

The barriers are anchored to the seabed but float on the surface of the water perpendicular to the coast. Each one is 30 meters long and they can be connected to form a chain two kilometers long. They will be located in areas where sargassum landings are the most frequent, taking into account the circulation of ocean currents and wind direction. They do not trap the sargassum but are designed to deflect it so that the currents move it away from the shoreline. The authorities expect that the amount of seaweed reaching the coast will be significantly reduced.

The barriers will not impede the movement of marine creatures nor trap them. Similarly, they will not affect coral reefs or the sea grass beds and they can be dismantled at the end of the season.

Specially equipped vessels will also be used in the future to collect patches of seaweed before they make landfall.

Beach cleaning brigades dispose of the seaweed that comes ashore on public beaches and hotels and resorts have their own cleaning programs.

In September and October, water temperatures begin to fall with the approach of cooler weather and periodic cold fronts (nortes) and the amount of sargassum is expected to decline.