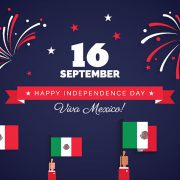 The light and shadow serpent that appears on the Pyramid of Kukulcan in the Great Plaza at Chichen Itza as the sun goes down on the Equinox, September 22, is also visible the day before and the day after (cloud cover permitting).

300 of the city’s restaurants are participating in this annual event offering set menus for a special rate.

A field of players that includes some of the PGA’s leading young players and former champions gathers for the OHL Classic at El Camaleón Golf Club in Mayakoba.

Over 2,000 triathletes are expected to compete in this year’s Xel-Ha Triathlon. The money raised from this event is donated to Flora, Fauna y Cultura de Mexico, A.C. to support conservation projects.

Playa Mamitas in Playa del Carmen will be the venue for one of the year’s most popular events, the Riviera Maya Jazz Festival. The festival program has yet to be announced.