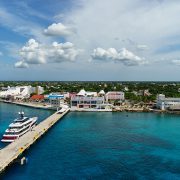 Cozumel commemorates the 500th anniversary of the first encounters that Spanish explorers had with the Maya of Quintana Roo in 1517and 1518.

The Cozumel: 500 Years, the Meeting of Two Cultures festival began in 2017 and concludes in May 2018 with a series of events such as exhibitions, concerts, seminars and more.

Puerto Morelos has a small naval base and on June 1, Navy Day, the whole town turns out to celebrate el Día de la Marina or Navy Day. Events include a boat procession and a swimming race. This is a great way to meet local people and join the party.

The population of Valladolid turns out on the night of June 4 to witness the representation of a rebellion against injustice in 1910 that was the first spark or chispa of the Mexican Revolution.

More than 800 actors take part in La Chispa. Dressed in authentic turn-of-the-century garb, they play the parts of the rebels, ruling aristocrats, and the police and soldiers sent to arrest them.

After marches through the streets to the main square, the evening culminates with the trial and mock execution by firing squad of the leaders of the rebellion.

164rd Anniversary of the Foundation of Holbox, Holbox, July 22

168th Anniversary of the Settlement of Isla Mujeres, August 17

Isla Mujeres celebrates its anniversary in August, 168 years since the first settlers in the modern era founded the village of Dolores. Isla Fest events include processions, dance performances, live music and more.

Visit the Royal Resorts blog at  www.royalresorts.com for listings of more events during the year.