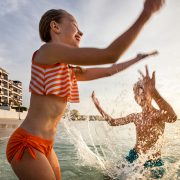 For the third year running, Merida’s La Mejorada neighborhood will be transformed into an urban garden by the Camino de Las Flores, the path of the flowers. This colorful walkway of plants, flowers, hedges and shrubs and trees clipped into the shapes of native birds and animals will lead to La Mejorada Convent and the Museum of Popular Art.
Organizers have promised that this year’s garden display will be bigger and even more beautiful than previous years and will attract visitors throughout April.

This tournament attracts fishermen from all over the state and the Caribbean. Competitors are asked to follow catch and release policy to help preserve fish stocks.

Bird watchers will be gathering on the island of Cozumel in April to learn more about the Cozumel Emerald Hummingbird (Chlorostilbon forficatus), a beautiful little bird found nowhere else in the world. There will be seminars and birding trips and a Cozumel Birding App with information on the island’s resident and migrant species will be unveiled.
A second, larger Bird Festival is organized on the island in October.
Cozumel has several endemic species of birds and mammals, including a dwarf raccoon.

Anniversary of the Founding of Cancun, April 20

Cancun turns 48! The celebrations include masses, processions, exhibitions and more to celebrate the anniversary of the founding of Cancun.

This tournament attracts fishermen from all over the state and the Caribbean. Competitors are asked to follow catch and release policy to help preserve fish stocks.

The 50th year of this famous yacht race from the St. Petersburg Yacht Club in Florida to Isla Mujeres. The event also features parties for the yacht crews and islanders, excursions and a race around Isla Mujeres.

This traditional festival commemorates the day of the Santa Cruz and the arrival of the island’s 21 founding families in 1848, fleeing from the Caste War that broken out in the Yucatan Peninsula in 1847.

Cozumel commemorates the 500th anniversary of the first encounters that Spanish explorers had with the Maya of Quintana Roo in 1517and 1518.
The Cozumel: 500 Years, the Meeting of Two Cultures festival began in 2017 and concludes in May 2018 with a series of events such as exhibitions, concerts, seminars and more.

Cancun now has its own Big Wheel
Scroll to top