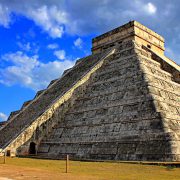 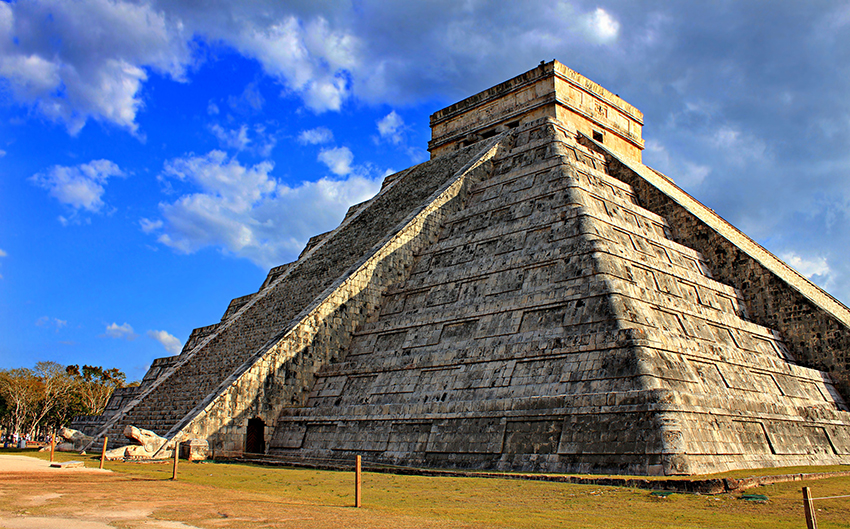 As the sun sets in the west and the shadows lengthen in the ancient Mayan city of Chichen Itza, a collective cry of wonder goes up from the thousands of people that gather at the foot of the Pyramid of Kukulcan on March 20, the spring equinox. They are witnessing an amazing spectacle, the mysterious shadow of a serpent rippling across the stone, the symbol of an ancient god returning to earth.
Also known as El Castillo, the Pyramid of Kukulcan is a feat of ancient engineering and a solar clock, aligned to catch the rays of the setting sun on the days of the spring and fall equinoxes in March and September, respectively. Triangles of light and shadow form along the side of the north staircase and the figure of a snake appears, merging with the head of a stone snake at the foot of the building. The illusion is created of a gigantic serpent slithering down from the heavens and across the ground towards the huge sinkhole in the forest known as the Sacred Cenote.
The snake symbolizes Kukulcan (also known as Quetzalcoatl in central Mexico), the feathered serpent god, who returns to earth to give hope to his followers and heralds the spring planting and fall harvest seasons for the Maya.
Your Concierge can help you arrange a day trip to the UNESCO World Heritage Site of Chichen Itza for the Equinox, or at any other time of the year. This year, the Spring Equinox falls on March 20 but it is traditionally observed on March 21 at Chichen Itza as it coincides with an official national holiday. The light and shadow snake is visible the day before and after the equinox, cloud cover permitting.

Making a day of it in eastern Yucatan

If you would prefer to explore Chichen Itza at your own pace, why not rent a car and explore the eastern Yucatan? 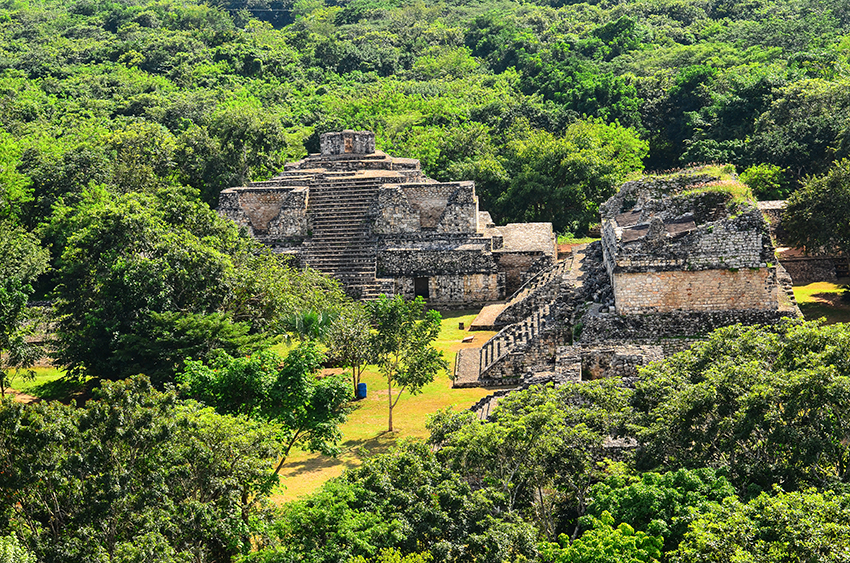 Start your Maya time travel with an early visit to the archaeological site of Ek Balam. Located 20 minutes to the north of Valladolid, Ek Balam (“black star jaguar in Maya”) was inhabited from 600 B.C. and reached its peak between A.D. 600 and 900.
Excavation is still underway at the site and in an area of 12 square kilometers archaeologists have already unearthed five sacbes or ceremonial causeways, defensive walls, a ball court, steam baths, chultunes or Mayan wells, several stelae and over 60 structures ranging from temples and palaces to tiny shrines. They have discovered hieroglyphic inscriptions, a royal tomb with offerings of jade, pottery and copal incense and proof of the links Ek Balam once had with rival city states in the Yucatan, on the coast of Quintana Roo and the Peten region in northern Guatemala.
The central plaza is dominated by the Acropolis, a maze of palaces and temples that is 31 meters high. Its crowning glory is an intricate frieze of stucco masks, the statues of richly attired nobles in feather headdresses, and a seated figure thought to be one of the rulers.
Archaeologists have deciphered hieroglyphic inscriptions at the site and others in the area to discover that Ek Balam or Talol was ruled by a powerful dynasty and have identified the city’s founding father. Ukit Kan Le’k Tok came to power in 770 A.D. and ushered in an extraordinary building and artistic boom.
Experts recently revealed that Ek Balam’s scribes and artists brought new techniques, colors, the flowing lines of calligraphy and different symbols to the area. These gifted painters went on to influence mural painting at larger sites such as Chichen Itza.
After your Ek Balam visit, a dip in the cold, clear waters of a cenote is a great way to cool off. There is a sinkhole just down the road from the archaeological site or you can drive to Hubiku Cenote outside the village of Temozon. 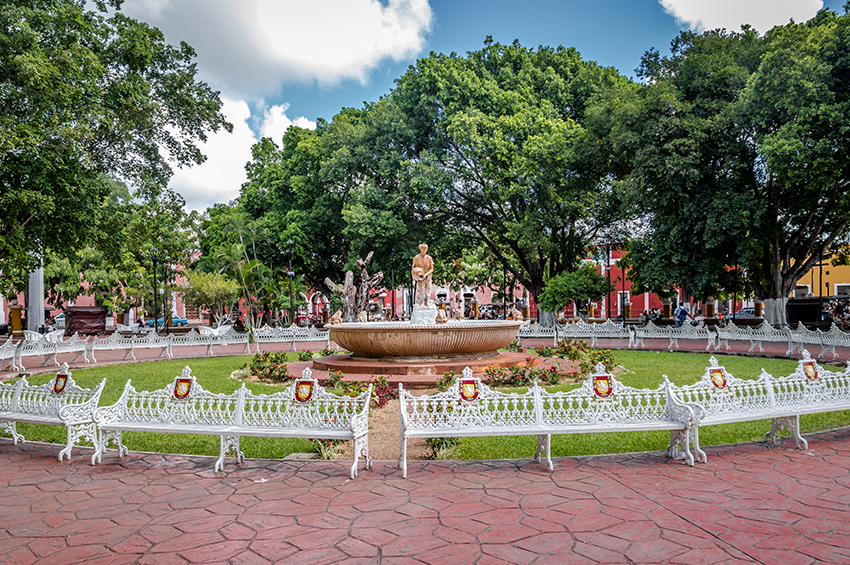 As an alternative spend the morning in the colonial city of Valladolid. This peaceful pueblo magico is steeped in history and tradition. Start with the spectacular Zaci Cenote, stroll through the main square to the Cathedral and take a guided tour of Casa de Los Venados, a 17th-century restored mansion that is a private home and a museum with a collection of more than 3,000 pieces of Mexican folk art. Admission is a $60 peso donation for charity. Then walk along Calzada de Los Frailes, the street leading to San Bernardino Church and Sisal Convent. You’ll pass more restored mansions, craft shops, a workshop where cacao is transformed into chocolate using traditional techniques, and a perfumery.
To the north of Valladolid, a side trip to the Mayapan artisanal distillery gives you a glimpse of the world of the blue agave, the plant that gives us tequila. Native to the state of Jalisco, the plant is flourishing in the fields surrounding the distillery.
When the plants are seven years old they are harvested for their root stem or piña, which is then roasted. The sugary liquid crushed from the cooked piña is fermented, distilled and stored in wooden barrels until ready to be bottled as blanco, reposado or añejado varieties of Mayapan.
Mayapan is not the only spirit produced in Valladolid, the town is also famous for Xtabentun, the fragrant anise-flavored liqueur of the Yucatan, which is made from honey and a native flower. 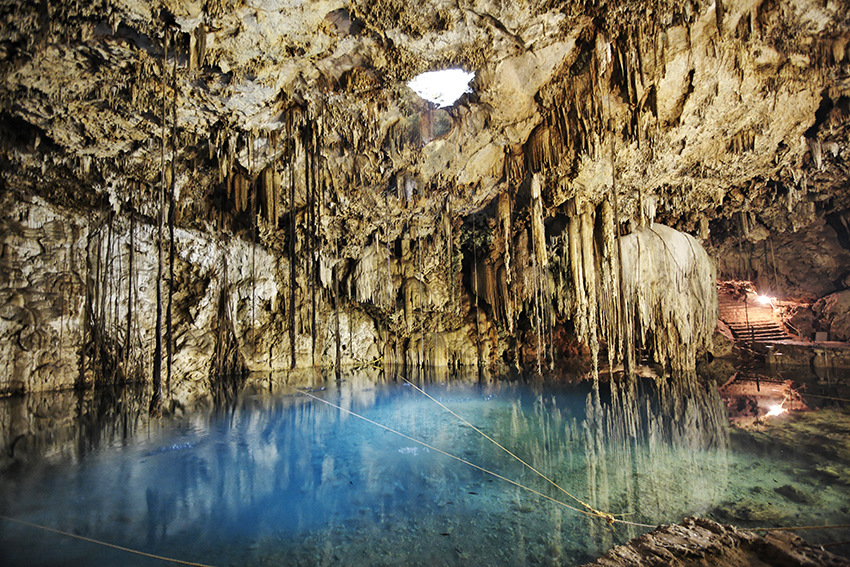 Just outside Valladolid, Dzitnup or Xkeken Cenote is the Yucatan’s most famous sinkhole and there are more of these mysterious sinkholes to visit en route to Chichen Itza. Call in at Ik-Kil Cenote and Balancanche Caves during your travels through the eastern Yucatan. 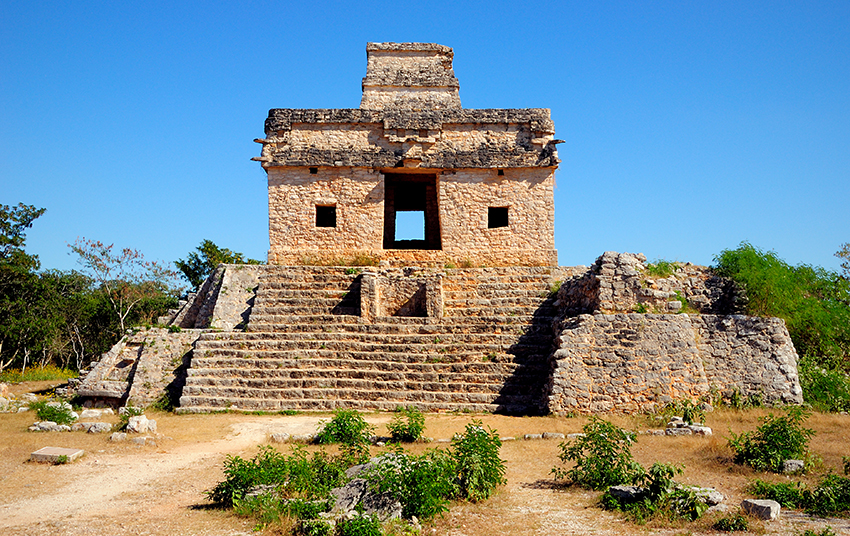 Chichen Itza is not the only Mayan ceremonial center in the Yucatán to have temples with solar, lunar or planetary alignments. The doorway of the Temple of the Seven Dolls at Dzibilchaltun (13 miles north of Mérida) makes a perfect frame for the rising sun on the day of the Equinox.

Contact your Concierge to arrange a day trip to Chichen Itza.

Running for a cause, the 3rd Royal Resorts Foundation Race, February 18, 20...