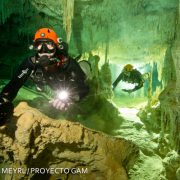 Cave divers belonging to the Gran Acuifero Maya (Great Maya Aquifer Project) expeditionary team that has been exploring the Sac Actun and Dos Ojos flooded cave systems near Tulum in the Riviera Maya for 10 months found a tunnel hidden deep in the limestone rock that links the two. At 215 miles long, the flooded cavern is now the world’s largest known underwater cave and will henceforth be called the Sac Actun system (Sac Actun means the white cave in Maya).

The leader of the dive team is Robert Schmittner who has been exploring the Sac Actun system for 14 years.

The divers believe that further exploration could show that this vast underground river system is connected with other flooded cave systems in the area.

Guillermo de Anda, the Mexican archaeologist and National Geographic explorer who heads up the Gran Acuifero Maya project revealed that during the exploration of Sac Actun the team had made some amazing discoveries that will help build up a picture of the early history of the Yucatan Peninsula. He referred to it as a vast archaeological site. To date, finds include the fossils of prehistoric animals, traces of the earliest human inhabitants and structures, bones, ceramics, offerings and cave paintings associated with the ancient Maya.