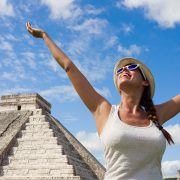 By the end of 2017, Mexico had welcomed 39, 547,000 international visitors, a record-breaking number that is likely to mean that the country will climb one place in the World’s Most Visited Countries to position No. 7.

The number of international visitors showed a 12.7 percent increase from 2016 and tourism revenue was also up by 8.9 percent.

The network of international flights to Mexico continued to expand in 2017 and was 10.2 percent up on 2016 with the number of seats on direct flights reaching 28 million. This includes seats on new direct routes and additional seats on existing routes where the number of flights increased or larger airplanes were introduced.

Days of Romance in the Riviera Maya
Scroll to top