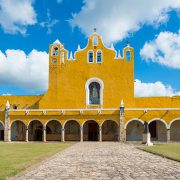 The faithful gather in the colonial town of Izamal to honor the Virgin de la Concepcion, patron saint of the Yucatan. The community celebrates with processions of the gremios or guilds and neighborhoods, masses, fireworks, flowers and the traditional vaquería or fiesta featuring live music, dances and cuisine.

The patron saint of Mexico is honored nationwide with serenades of “Las Mañanitas,” the traditional birthday song the evening of December 11, offerings of fragrant flowers, pilgrimages and masses.

This traditional fair is dedicated to the patron saint of Valladolid, the Virgin de la Candelaria. Events in this colonial town include an agricultural fair, processions, concerts and dances.