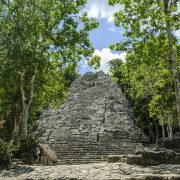 Archaeologists working at the jungle city of Coba have joined forces with experts in Mayan epigraphy to decipher the glyph inscriptions on standing stones or stelae and wall panels at the site. After years of study they have identified a dynasty of 14 rulers that reigned over the city from the end of the 5th century A.D. until A.D. 780.

The 10-year study has also revealed the names of the supreme leaders of the city: Ju’npik Took’; ¿K’ahk Chitam?; Ux Man; …K’awiil; Yopat Taj… Nah; Ixik… Yopaat; K’ahk’… Yopaat; Kalo’mte’…; Lord A, Xaman K’awiil, and Lords B, C, D and E. Glyph inscriptions have linked five of the earliest rulers with the construction of buildings in the Cobá group, the oldest at the site.

The longest inscription was found on Panel 7 at the ball court and by cracking the glyph code, the project team was able to trace the founding of the dynasty to around A.D. 500.

Other rulers had links with other cities in the Yucatan such as Ek Balam and to city states further afield in the Petén region of northern Guatemala, such as Motul de San José, Naranjo and La Corona, and to Uxul and Calakmul in southern Campeche.

Although its name does not appear in the glyph inscriptions unearthed to date, experts know that Cobá also had ties to its powerful northern neighbor Chichen Itza. A sacbe or ceremonial Mayan road connected the city to Yaxuna near Chichen Itza, a distance of 101 kilometers, the longest such highway found to date in the Maya World.

Travel back in time; ask the Concierge about day trips to the fascinating jungle city of Coba.