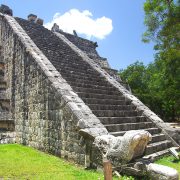 Archaeologists working for the Mexican Institute of Anthropology and History (INAH) have discovered that the Ossuary, another of the ancient temples at the UNESCO World Heritage Site of Chichen Itza, is aligned according to the precise calculations of long lost astronomers. Like the Pyramid of Kukulcan, famous for the serpent of light and shadow that forms along the staircase on the days of the spring and fall Equinox, the Ossuary is also the site of a light and shadow occurrence twice a year, although less spectacular.

Located half way between the Pyramid of Kukulcan and The Observatory, the Ossuary is a 12-meter-high temple pyramid built over a cave. On May 23 and July 19, when the sun reaches its zenith and objects cast no shadows, the mouth of the cave is illuminated, possibly showing the path to Xibalba, the Mayan Underworld and the home of the gods.