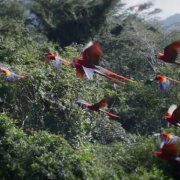 Xcaret’s scarlet macaw breeding and conservation program is the subject of a documentary called “Volando a Casa” (Flying Home: The Return of the Scarlet Macaw) that is participating in the Boston College 2017 Corporate Citizenship Film Festival in the United States and is up for an award.

Produced by Xcaret and Mexican production company Bicho Studio, the documentary follows the macaws on a journey from their birthplace in Xcaret to the jungles of Chiapas and southern Veracruz where they spend time adapting to their new habitat before being released to the wild.

Xcaret is working with communities, local authorities and conservation groups in the release areas and with universities and research centers to make this reintroduction program a success. The survival rate of the macaws born in the Riviera Maya park is 80 percent and in only three years, this ambitious program has been instrumental in increasing Mexico’s critically endangered wild macaw population by 80 percent.

More Ice Age discoveries in the cenotes of Quintana Roo