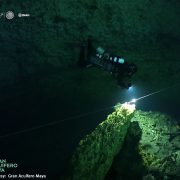 Archaeologists and cave divers participating in Gran Acuifero Maya, a research project to explore and map the cenotes of Quintana Roo, Yucatan and Campeche recently announced the discovery of the bones of prehistoric mammals dating back 10,000 years. They made the find in a huge flooded cave in the Muyil-Tulum-Chumpon area, and at a depth of 100 meters.

During their reconnaissance of the cave, Dr. Guillermo de Anda, project leader and Nat Geo explorer, and underwater explorer Robert Schmittner discovered stalagmites with a length of 30 meters, the partial skulls of two bears dating from the Pleistocene and more than 100 bones of unidentified species.

This follows earlier finds of a human skull that is at least 10,000 years old and the jaw bone of a Gomphothere, an elephant-like creature that lived in the area during the last Ice Age.

The research team had previously registered five similar bear skulls in flooded caves in neighboring Yucatan. The discoveries will help researchers build up a picture of the biogeography of the Yucatan Peninsula 10,000 years ago as the Ice Age was drawing to a close.

One theory explaining the presence of the animal bones in the cenote is that there was climatic instability between the Holocene and the Pleistocene leading to a prolonged drought. Large animals such as bears and gompotheres may have ventured into the caves in search of water and fallen to their death. Later, as the ice sheets receded over North America, sea levels rose flooding the caves and creating a time capsule preserving their bones.

Given the importance of the find, a paleontologist will soon be joining the multidisciplinary team of archaeologists, biologists, geologists and cave divers, which has already explored 45 caves in Quintana Roo.

At 100 meters deep, this cave is the second deepest discovered to date in this area of the Yucatan Peninsula, the deepest is El Pit, which is more than 120 meters deep. In addition to studies of the water, stalagmites and analysis of the remains of extinct prehistoric species, a 3D model of the cave is being developed in collaboration with National Geographic using technology designed by engineer Corey Jaskolski.

A documentary about Xcaret Park’s macaw breeding program is participating...
Scroll to top