Travel through time and see some of the Yucatan’s most colorful wildlife in one day. Your first stop is the archaeological site of Ek Balam and then it’s on to the Gulf coast and the Rio Lagartos Biosphere Reserve, home to thousands of flamingos and other birds.

Located 20 minutes to the north of Valladolid, the ancient city of Ek Balam or “black star jaguar” in Maya (star/black = ek, jaguar = balam) reached its peak between A.D. 600 and 900. During this time, it forged political and trade links with other city states in the Maya World, including Chichen Itza, and the mix of architectural and artistic styles on display at the site reflects its regional influence.

To date archaeologists have found five sacbes or ceremonial causeways, three defensive walls, a ball court, chultunes or Mayan wells, several stelae (carved standing stones) and over 60 structures ranging from temples and palaces to tiny shrines. Other important discoveries include a royal tomb, the city’s emblem glyph and the name of the founding father of a powerful dynasty. Ukit Kan Le’k Tok came to power in 770 A.D. and ushered in an extraordinary building and artistic boom.

The highlight at Ek Balam is undoubtedly the 31-meter-high Acropolis with its magnificent stucco façade featuring statues of long-lost rulers, hieroglyphic inscriptions, murals and masks in the form of the gaping jaws of the earth monster. 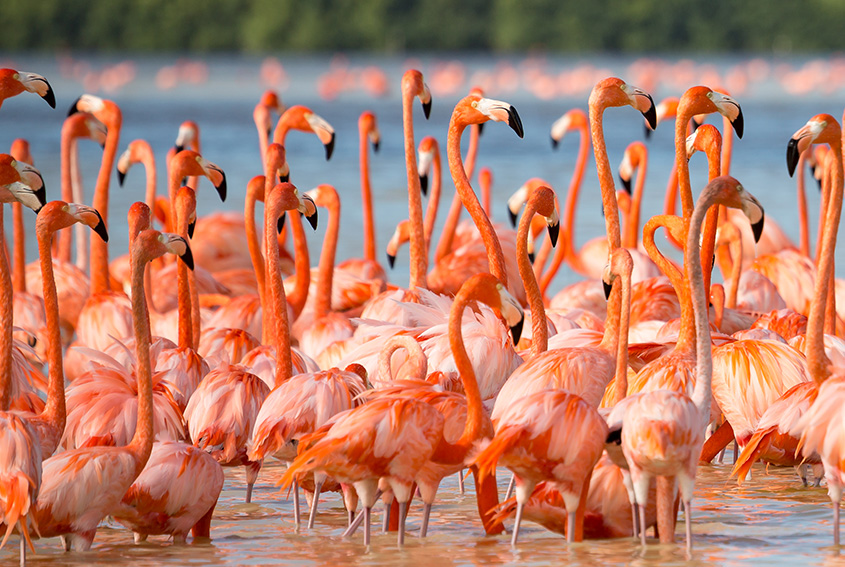 As you approach the Gulf coast of the Yucatan, you are entering flamingo country. Get ready to see pink wherever you look in Rio Lagartos Biosphere Reserve. Although this coastal wetland reserve is rich in wildlife, it is famous for its flamingos and has a breeding colony estimated at over 45,000. So many of them gather in the shallow lagoons and salt marshes that they literally dye the horizon pink! To see them searching for food, high stepping through the water, preening their bright plumage or in flight formation is to witness one of the natural wonders of the Yucatan.

Fishermen from the waterfront village of Rio Lagartos offer boat trips along the ria or estuary and through the mangroves to the flamingo feeding grounds. Keep a lookout for crocodiles or lagartos hidden among the mangrove roots; they give the reserve its name. Lone ospreys hunt for fish; flocks of white pelicans and skimmers gather in the lagoons and kingfishers perch on branches. You’ll spot ibis, roseate spoonbills, and there are 16 species of heron and egret in the reserve, including the stately great egret, the snowy egret, green heron, tricolored heron and little blue heron. Make sure you have your camera or mobile at the ready for photos!

You’ll notice that Yucatan flamingos are a much brighter shade of pink than other species of flamingos you might have seen. Their dazzling salmon pink plumage is due to a diet of minute brine shrimps and crustaceans found only in the coastal lagoons of the Yucatan.

At sunrise, flocks of Rio Lagartos flamingos fan out to feed in lagoons along the Gulf coast of the Yucatan, returning to the reserve at sunset. There is a separate flamingo colony in Celestun Biosphere Reserve on the west coast of the state. They can also be seen in Holbox, Contoy and travel as far as Cozumel and Sian Ka’an in Quintana Roo. Birds that have been ringed in Río Lagartos have even been sighted in Cuba.

During your boat trip, you’ll also venture into the strange landscape of Las Coloradas, the salt flats that have been harvested since the days of the ancient Maya. Shallow lagoons filled with water that is bright pink, red and even purple lie under a clear blue sky and yield salt as the water evaporates in the fierce tropical heat. 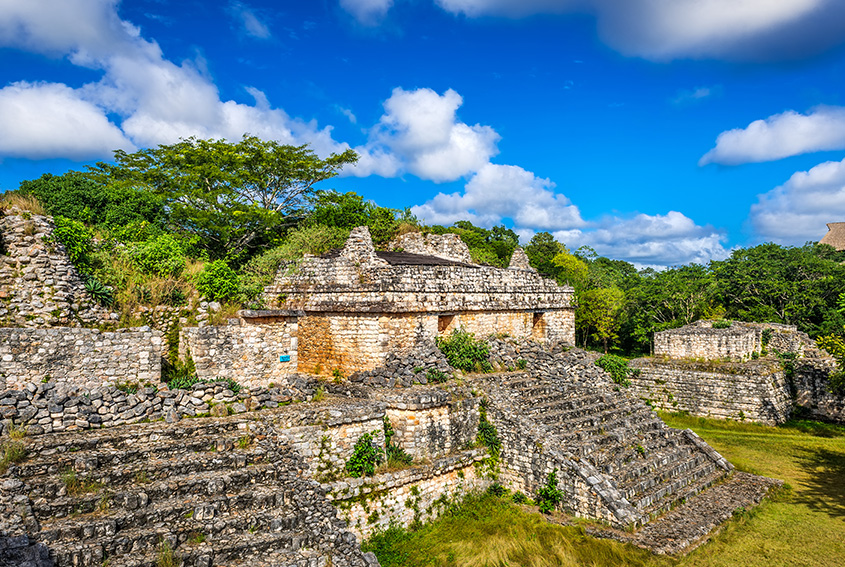 Planning a trip to Ek Balam and Rio Lagartos

Your Concierge can help you arrange trips to Ek Balam and Río Lagartos. For even more time in Rio Lagartos, plan an early morning start in the reserve to see more birds. You can also combine a trip to Ek Balam with a visit to the colonial town of Valladolid and a cenote swim.

Wine of the Month
Scroll to top